Forest Hill is a suburb and ward of south east London, England, located in the London Borough of Lewisham.

A map showing the Forest Hill ward of Lewisham Metropolitan Borough as it appeared in 1916.

Like much of London, Forest Hill was only sparsely populated until the mid-19th century. The name Forest Hill, originally simply "The Forest", referred to the woodland which once covered the area and which was a relict part of the Great North Wood.

A canal, the Croydon Canal, was constructed through the area in 1769 but the large number of locks (28) meant it was not a commercial success, and it was bought by the London & Croydon Railway Company who constructed their railway along the same route, opening it in 1839. The ponds in the Dacres Wood Nature Reserve (Dacres Road) and the retaining wall of the footpath opposite the station outside the pub are about the only physical evidence of the canal which still exist.

When the Crystal Palace was moved from Hyde Park to Sydenham, large homes were built on the western end of Forest Hill.

In 1884, what would become London's oldest swimming pool was constructed on Dartmouth Road.

The tea merchant Frederick Horniman built a museum to house his impressive collection of natural history artifacts. He donated the building and its gardens to the public in 1901 and this became the Horniman Museum.

As its population grew, two large secondary schools were built in the area – Forest Hill Boys and Sydenham Girls on the brink of Forest Hill. 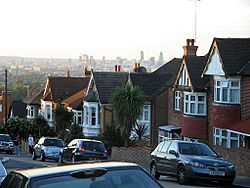 View from the top of Forest Hill. The skyscrapers of the City of London can be seen in the distance. 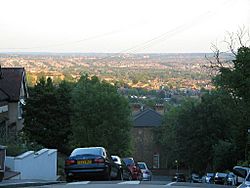 View of the London skyline from the Horniman Museum garden.

Forest Hill is home to the celebrated Horniman Museum. Despite a leaning toward anthropological and cultural collections, the museum is also home to a newly opened (July 2006) aquarium and one of the most varied collections of taxidermy in the northern hemisphere. It also houses one of the finest collection of musical instruments in the British Isles. Contained within its accompanying gardens is an animal enclosure, flower gardens, and a Grade II listed early 20th century conservatory. Views from the gardens stretch out over central and north London.

Following a successful and widely supported campaign from local group 'Save The Face Of Forest Hill', Louise House was designated a Grade II listed building by English Heritage, and this will have to be allowed for in any plans for redevelopment. Mayor of Lewisham Steve Bullock continues to support the project.

Forest Hill Library was built in 1901 to an Arts and Crafts design by local architect Alexander Hennell. It is one of over 500 Grade II listed buildings in Lewisham Borough. It was refurbished in 2008.

With a range of architectural styles spanning the late 19th and 20th centuries, Forest Hill was described by Sir Norman Foster as "a delightful pocket of South London". Of particular note are the Capitol Cinema (now a JD Wetherspoon pub), the Horniman Museum, and classic art deco mansion blocks Forest Croft and Taymount Grange.

Forest Hill railway station is located on the South Circular Road (A205), and is served by frequent London Overground and Southern trains to London Bridge, London Victoria, Croydon, Caterham, Dalston Junction and Highbury & Islington. Forest Hill is also served by a number of bus routes: 122, 176, 185, 197, 356, 363 and P4.

All content from Kiddle encyclopedia articles (including the article images and facts) can be freely used under Attribution-ShareAlike license, unless stated otherwise. Cite this article:
Forest Hill, London Facts for Kids. Kiddle Encyclopedia.