There are four tracks through the station, although only the slow lines (the two outer tracks) have platforms. It lies on the Brighton Main Line between Honor Oak Park and Sydenham stations.

There are two entrances, the main one being on platform 1 at the bottom of the South Circular Road, and a side entrance on platform 2 on Perry Vale. The ticket office is placed in the main entrance, although there are ticket machines outside both entrances.

The station was opened by the original London & Croydon Railway (L&CR) on 5 June 1839, as Dartmouth Arms (the name of the local inn).

The line was also used by the London and Brighton Railway from 1841 and the South Eastern Railway (SER) from 1842. In 1844, the station was chosen by the L&CR as the northern terminus for Phase 1 of an experimental Atmospheric railway to West Croydon. A pumping station was also constructed at the station. The L&CR and the L&BR merged to form the London Brighton and South Coast Railway (LB&SCR) in July 1846; the following year "atmospheric" working was abandoned. In 1845 the station became Forest Hill for Lordship Lane. 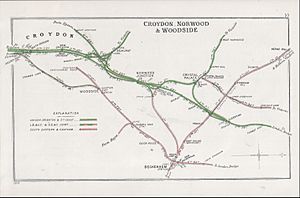 A 1908 Railway Clearing House map of lines around the Brighton Main Line between South Croydon and Selhurst/Forest Hill, as well as surrounding lines

The LB&SCR moved the Down platform during the early 1850s when the line was quadrupled, and extended the island platform around 1864.

The LB&SCR station buildings were destroyed by bombing during World War II and have been replaced by a more modern system-built structure. The short narrow island platform serving the fast lines was demolished in the early 1960s.

Forest Hill is served by 8 trains in each direction off peak, with additional Southern services at peak hours. Southern operates 4 to 8 car trains throughout the day, with 10 carriage trains at peak hours.

In a rail meeting in Sydenham, Southern said Thameslink trains may stop here after the Thameslink Programme is completed in 2018.

All content from Kiddle encyclopedia articles (including the article images and facts) can be freely used under Attribution-ShareAlike license, unless stated otherwise. Cite this article:
Forest Hill railway station Facts for Kids. Kiddle Encyclopedia.