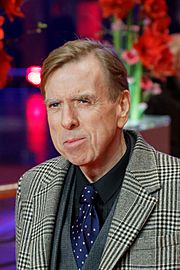 Timothy Spall OBE (born 27 February 1957) is a British character actor. He was born in Battersea, London and lives in Forest Hill, London. He played one the main characters in drama series Auf Wiedersehen, Pet. He played major characters in Secrets & Lies, Shooting the Past as well as the title role in Pierrepoint.

He presents Timothy Spall: Back at Sea in which he and his wife travel around the coast of the United Kingdom in a Dutch barge.

His younger son Rafe Spall is an actor.

All content from Kiddle encyclopedia articles (including the article images and facts) can be freely used under Attribution-ShareAlike license, unless stated otherwise. Cite this article:
Timothy Spall Facts for Kids. Kiddle Encyclopedia.