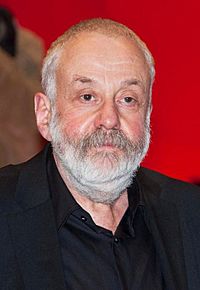 Leigh was born in Brocket Hall, Welwyn, Hertfordshire. He was bought up in Broughton, Salford, Lancashire. He is Jewish. He was married to actress Alison Steadman from 1973 until they divorced in 2001. They have two sons, Toby and Leo. Leigh lives in Camden, London.

All content from Kiddle encyclopedia articles (including the article images and facts) can be freely used under Attribution-ShareAlike license, unless stated otherwise. Cite this article:
Mike Leigh Facts for Kids. Kiddle Encyclopedia.