Welwyn Garden City ( WEL-in) is a town in Hertfordshire, England, 20 miles (32 km) north of London. It was the second garden city in England (founded 1920) and one of the first new towns (designated 1948). It is unique in being both a garden city and a new town and exemplifies the physical, social and cultural planning ideals of the periods in which it was built. 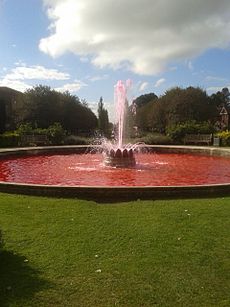 Welwyn Garden City was founded by Sir Ebenezer Howard in the 1920s following his previous experiment in Letchworth Garden City. Howard had called for the creation of planned towns that were to combine the benefits of the city and the countryside and to avoid the disadvantages of both. The Garden Cities and Town Planning Association had defined a garden city as

"a town designed for healthy living and industry of a size that makes possible a full measure of social life but not larger, surrounded by a rural belt; the whole of the land being in public ownership, or held in trust for the community"

In 1919, Howard arranged for the purchase of land in Hertfordshire that had already been identified as a suitable site. On 29 April 1920 a company, Welwyn Garden City Limited, was formed to plan and build the garden city, chaired by Sir Theodore Chambers. Louis de Soissons was appointed as architect and town planner, C.B Purdom as finance director and Frederic Osborn as secretary. The first house was occupied just before Christmas 1920.

The town is laid out along tree-lined boulevards with a neo-Georgian town centre. It has its own environmental protection legislation, the Scheme of Management for Welwyn Garden City. Every road has a wide grass verge. The spine of the town is Parkway, a central mall or scenic parkway, almost a mile long. The view along Parkway to the south was once described as one of the world's finest urban vistas. Older houses are on the west side of Parkway and newer houses on the east side

The original planners intended that all the residents of the garden city would shop in one shop and created the Welwyn Stores, a monopoly which caused some local resentment. Commercial pressures have since ensured much more competition and variety, and the Welwyn Stores were in 1984 taken over by the John Lewis Partnership.

During World War II the Special Operations Executive (SOE) had a research department in the town, and the Inter-Services Research Bureau developed the Welrod pistol and the Welgun sub-machinegun there. Station IX was a secret SOE factory making commando equipment at the Frythe Hotel. 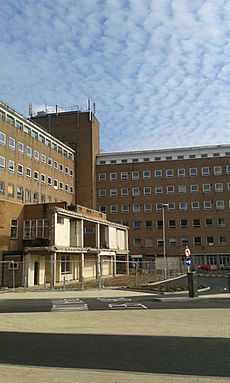 There was a large general hospital in the town, the Queen Elizabeth II Hospital, but in 2014 emergency and inpatient services were transferred to the Lister Hospital in Stevenage. A new hospital, completed in June 2015, offers outpatient, diagnostic and ante/postnatal services.

A shopping mall, the Howard Centre, was built in the 1980s, incorporating the original railway station.

There is a resurgence of interest in the ethos of the garden city and the type of neighbourhood and community advocated by Howard, prompted by the problems of metropolitan and regional development and the importance of sustainability in government policy.

Roman baths are preserved in a steel vault underneath junction 6 of the A1(M) and are open to visitors.

The local civic society, which aims to preserve and conserve the garden city ethos, is the Welwyn Garden City Society.

The international ecumenical Focolare movement has its British headquarters at Welwyn Garden City.

In 2008, during construction of a site for HSBC, 60 unsecured argonite fire suppressant cylinders discharged, killing one person, injuring six other and causing substantial damage. Three firms were later convicted of health and safety offences. 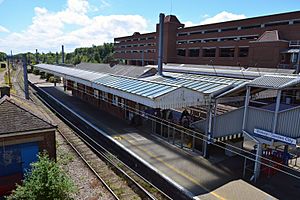 Buses are provided by Arriva Shires & Essex, Centrebus and Uno, with some assistance from Hertfordshire County Council. Arriva's 300/301 Centraline service links Welwyn Garden City to the major nearby towns of Stevenage, Hatfield, St Albans and Hemel Hempstead, as well as neighbouring villages Woolmer Green and Knebworth. The 301 additionally connects both the nearby hospitals in Stevenage and Welwyn Garden City, while the 300 provides a direct link to recreational areas such as Stanborough Lakes in Welwyn Garden City and Verulamium Roman town in St Albans. Service 314 is provided by Centrebus, connecting Welwyn to Codicote and Hitchin. The bus station is close to the railway station.

Uno buses serve the nearby towns of Hatfield, St Albans, Potters Bar, Hemel Hempstead, Watford and Barnet. Uno buses also serve further out into North London. Both the 601 and 653 also provide links to the University of Hertfordshire.

Green Line bus route 724 runs a service from Welwyn Garden City to Heathrow Airport, stopping at stops such as Watford and Rickmansworth.

The railway station is in the town centre. Trains are operated by Thameslink and run south to London King's Cross and Great Northern to London Moorgate and Thameslink run north to Stevenage, Hitchin, Cambridge.

Welwyn Garden City is well-served by major arterial road routes, namely the A1(M) and the A414. The Great North Road also passes around it next to the A1(M). In addition, there are other links to St Albans, Harpenden and Luton (via B653), Hatfield (via A1000 and A1001) and Hertford (via B1000). During the growth in car ownership in the 1950s and 1960s, the town struggled to build enough garages or hard-standing spaces for the additional vehicles, which has led to many properties losing their traditional hedges and front gardens to accommodate driveways.

Welwyn Garden City's Music Society gave its first concert in 1921 within weeks of the town's foundation; its choir and orchestra, led by James Ross, have performed a regular concert season in the town ever since. The town also boasts a Concert Club, which promotes chamber music recitals, and a Male Voice Choir. Welwyn Garden City Band was founded in 1934.

Welwyn Garden City football team founded in 1921, known as the Citizens, are based in Herns Lane.

There are three golf courses: Panshanger, owned and operated by the borough council, Mill Green Golf Course located in Gypsy Lane and the Welwyn Garden City Golf Club, of which Nick Faldo was once a member.

The town has a rugby club called Welwyn RFC.

The lake in Stanborough Park is the home of Welwyn Garden City Sailing Club (founded 1973) and the WGC Angling Club.

Several films and television programmes were shot in whole or in part in Welwyn Garden City, including

Scenes in the film Battle of Britain were shot at Panshanger Aerodrome, and the film of Graham Greene's Brighton Rock was made at the Associated British Picture Corporation's Welwyn Garden City studios.

Welwyn Garden City is sometimes referred to on account of its name or suburban character, for example in George Orwell's Keep the Aspidistra Flying, the 1973 film "Steptoe and Son Ride Again", a sketch by Mel Smith and Griff Rhys Jones in Alas Smith and Jones, the TV series Porridge and Strange, in the lyrics of Billy's Line by Red Box, and in a song by Edwyn Collins.

Ever since its inception as a garden city, Welwyn Garden City has attracted a strong commercial base with several designated employment areas. Among the companies trading in the town are: 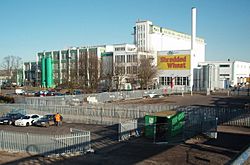 The Shredded Wheat factory as it was in 2007 while still in operation. The landmark Shredded Wheat sign, visible from trains arriving in Welwyn Garden City, has now been removed.

Welwyn Garden City was once well known as the home of the breakfast cereal Shredded Wheat, formerly made by Nabisco. The disused Shredded Wheat factory with its large white silos is a landmark on rail routes between London and the north of England. The factory, designed by de Soissons and built in 1924 by Peter Lind & Company, is a Grade II listed building. Cereal production moved to Staverton, Wiltshire in 2008 when the owner, Nestlé, decided that the factory required significant and prohibitive investment, due to the age of the building. Tesco applied to build a new supermarket on the site, but planning permission was refused by the local authority in January 2012 after significant public protest. In December 2018, the newly renamed "Wheat Quarter" area had planning permission approved for complete area redevelopment, consisting of 1,454 units, mainly homes, as well as office, retail and community uses.

The former supermarket chain Fine Fare had its head office in the town at one time, as did ICI's Plastics Division.

There use to be a Xerox office located in Welwyn Garden City but closed in 2016.

There is now a redeveloped and enlarged Sainsbury's in the town centre, and a Morrisons in Panshanger along Black Fan Road.

A campus of Oaklands College is located near the town centre.

All content from Kiddle encyclopedia articles (including the article images and facts) can be freely used under Attribution-ShareAlike license, unless stated otherwise. Cite this article:
Welwyn Garden City Facts for Kids. Kiddle Encyclopedia.