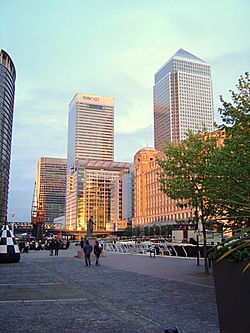 The HSBC Group is a British banking group, that is the second largest in the world. It was founded in 1865, Hong Kong, by the Scottish banker, Thomas Sutherland. Now, it's head office is in London, in the United Kingdom, in the building known as 8 Canada Square. Although it is a British Bank, it owns lots of banks in other countries around the world, including some in China, the United States, France, Spain and Russia.

All content from Kiddle encyclopedia articles (including the article images and facts) can be freely used under Attribution-ShareAlike license, unless stated otherwise. Cite this article:
HSBC Facts for Kids. Kiddle Encyclopedia.