Jaguar Racing is the name given to Jaguar's racing interests. It made its Formula E debut ahead of the 2016–17 Formula E season. It was previously a Formula One constructor that competed in the FIA Formula One World Championship from 2000 to 2004.

It was formed from the purchase by the Ford Formula One team in June 1999. Ford renamed the team Jaguar Racing as part of its global marketing operations to promote their Jaguar premium car company. Despite this branding, they continued to use Cosworth engines in the cars, no Jaguar engineering was involved.

The team in 2000 was managed by the head of Ford's Premier Automotive Group. The extra funding and publicity brought by becoming Ford's own team were obvious from the first race of the year. The team hired 1999 world championship runner up Eddie Irvine to partner former Stewart driver Johnny Herbert, but the results that season did not match the results that Stewart had been able to achieve in 1999. 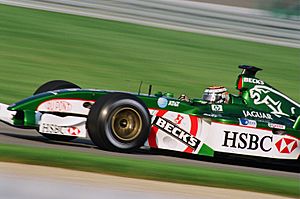 The Jaguar R3 being driven by Eddie Irvine in 2002

Results did not improve in 2001, and appointment of three-time FIA F1 World Champion Niki Lauda in the middle of the year did not help team morale, with the team sliding further back in the field. An attempt to bring ex-technical director Adrian Newey to Jaguar further destabilised the team.

2002 was even worse under and the Ford's board of directors were beginning to have major issues with the costs and benefits of running the team in Formula One, especially as it did not feature the parent company brand. Funding was reduced for 2003. Lauda and 70 other staff were made redundant, and a 2-year timeframe was given to show possible benefits.

2003 saw an improvement of form for the team as it benefited from good management and a more efficient usage of resources. 2004 saw a stabilisation of results, but the team was unable to challenge for points on a consistent basis. Ford chose to sell the operation near the end of 2004. In mid-November 2004, energy drink company Red Bull confirmed that they had purchased the Jaguar Formula One team from Ford as an ongoing outfit. The new team, named Red Bull Racing, used the chassis and engine that would have been Jaguar's 2005 Formula 1 challenger for its first season.

For the 2017-18 season, Jaguar re-signed Mitch Evans and 2014-15 champion Nelson Piquet Jr. moved to the team. At the season's first event in Hong Kong, Jaguar scored points in both of the weekend's races and took their first podium in the series.

All content from Kiddle encyclopedia articles (including the article images and facts) can be freely used under Attribution-ShareAlike license, unless stated otherwise. Cite this article:
Jaguar Racing Facts for Kids. Kiddle Encyclopedia.