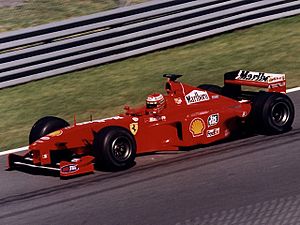 Irvine at the 1999 Canadian Grand Prix

Irvine spent time in the 1980s and early 1990's in Formula Ford and F3000. He joined Formula One in 1993, scoring a point on his debut as he replaced Emanuele Naspetti. He stayed on for Jordan in 1994 and 1995, before going on to drive for Scuderia Ferrari in 1996. His results were not as successful as Michael Schumacher's, including eight straight DNF's (Did not Finish) in a row in 1996. He eventually improved, scoring more podiums as he went along with the team.

In 1999 Michael Schumacher, the "#1 driver" for Ferrari was injured during a race at Silverstone. Irvine was made the #1 driver. The team put all their efforts towards Irvine winning a driver's championship. It wasn't successful, but Irvine did place second in the championship. Irvine left Ferrari after that season because he was frustrated with Ferrari's policy on team orders, which meant that one driver was labelled as "being #1." So, Irvine joined the new Jaguar Racing team in 2000, where he finally became the lead driver. However, the car was not competitive and reliable, so Jaguar, despite having lots of experience with Irvine, had little results. Irvine obtained the only two podiums Jaguar would ever see, and Irvine retired from Formula One after 2002.

All content from Kiddle encyclopedia articles (including the article images and facts) can be freely used under Attribution-ShareAlike license, unless stated otherwise. Cite this article:
Eddie Irvine Facts for Kids. Kiddle Encyclopedia.