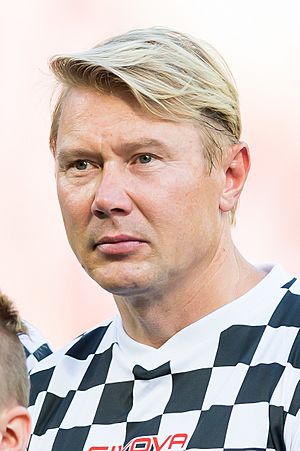 Mika Pauli Häkkinen; born 28 September 1968), nicknamed "the Flying Finn", is a Finnish former professional racing driver. He was the 1998 and 1999 Formula One World Champion, driving for McLaren and has been ranked among the greatest Formula One drivers in various motorsport polls. Häkkinen currently works in driver management and is a brand ambassador for various companies.

Häkkinen began his career in karting at the age of five and achieved success by winning regional and national kart championships. He progressed to car racing when he entered the Formula Ford and Formula Three series in Italy and the United Kingdom. After success in the series, Häkkinen entered Formula One in 1991 with the Team Lotus where he remained until 1992. The following year, he moved to McLaren as test driver before he was promoted to the race team following the departure of Michael Andretti.

After four years which yielded minor success for Häkkinen, he scored his first Formula One victory in 1997. He went on to win eight races of the 1998 season, securing the World Drivers' Championship at the season ending Japanese Grand Prix; his success also helped McLaren secure the World Constructors' Championship. Häkkinen repeated his World Championship success in 1999, taking five victories. He finished as runner-up in the Drivers' Championship in 2000, behind Michael Schumacher and secured two more victories in 2001 before announcing a sabbatical from the sport, which became full-time retirement in mid-2002.

For 2005, he moved to the Deutsche Tourenwagen Masters (DTM) series, where he secured his first victory that year. Häkkinen's form faded during 2006 although he secured two more victories in 2007. Häkkinen retired from top level active motorsport at the end of 2007 and has also competed in sports car racing with Mercedes-Benz. He also subsequently moved into driver management along with becoming a brand ambassador for Johnnie Walker and Mercedes-Benz AMG.

All content from Kiddle encyclopedia articles (including the article images and facts) can be freely used under Attribution-ShareAlike license, unless stated otherwise. Cite this article:
Mika Häkkinen Facts for Kids. Kiddle Encyclopedia.