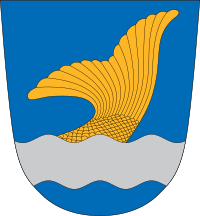 The arms of Vantaa

The biggest airport in Finland, Helsinki-Vantaa, is in Central Vantaa.

Finnish and Swedish are the official languages of Vantaa. In 2006 Swedish was the mother language of 3.1 percent of population of Vantaa.

People who were born in Vantaa

All content from Kiddle encyclopedia articles (including the article images and facts) can be freely used under Attribution-ShareAlike license, unless stated otherwise. Cite this article:
Vantaa Facts for Kids. Kiddle Encyclopedia.