Athyrium filix-femina, the lady fern or common lady-fern, is a large, feathery species of fern native throughout most of the temperate Northern Hemisphere, where it is often abundant (one of the more common ferns) in damp, shady woodland environments and is often grown for decoration.

Its common names "lady fern" and "female fern" refer to how its reproductive structures (sori) are concealed in an inconspicuous – deemed "female" – manner on the frond. Alternatively, it is said to be feminine because of its elegant and graceful appearance. 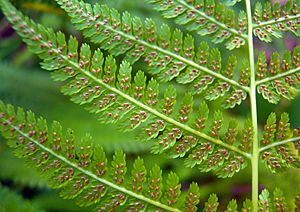 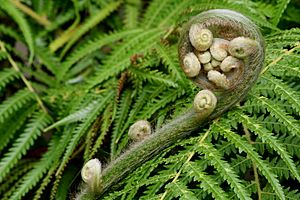 Athyrium filix-femina is cespitose (the fronds arising from a central point as a clump rather than along a rhizome). The deciduous fronds are light yellow-green, 20–90 centimetres (7.9–35.4 in) long and 5–25 cm (2.0–9.8 in) broad. Sori appear as dots on the underside of the frond, 1–6 per pinnule. They are covered by a prominently whitish to brown reniform (kidney-shaped) indusium. Fronds are very dissected, being 3-pinnate. The stipe may bear long, pale brown, papery scales at the base. The spores are yellow on A. angustum and dark brown on A. asplenioides.

A. filix-femina is very hardy, tolerating temperatures as low as −20 °C (−4 °F) throughout its range.

Numerous cultivars have been developed for garden use, of which the following have gained the Royal Horticultural Society's Award of Garden Merit: 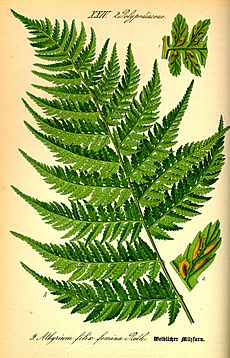 The young fronds are edible after cooking; Native Americans cooked both the fiddleheads and the rhizomes.

All content from Kiddle encyclopedia articles (including the article images and facts) can be freely used under Attribution-ShareAlike license, unless stated otherwise. Cite this article:
Lady fern Facts for Kids. Kiddle Encyclopedia.