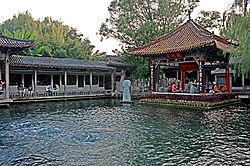 Jinan (Chinese: 济南/濟南) is a city in eastern China and the capital of China's Shandong province. Jinan's most famous attraction is the Baotu Spring. Li Qingzhao(李清照, 1084 - 1151 A.D) was born in Jinan and is a famous poet in China.

Jinan Municipality is divided into 6 district and 3 counties.

All content from Kiddle encyclopedia articles (including the article images and facts) can be freely used under Attribution-ShareAlike license, unless stated otherwise. Cite this article:
Jinan Facts for Kids. Kiddle Encyclopedia.