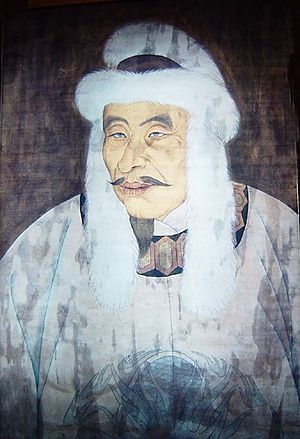 The Jurchens were a Tungusic people who lived in Manchuria in present-day Northeast China. They were known as Jurchens until the 17th century when they became known as the Manchu. The Jurchens established the Jin Dynasty. The Joseon Dynasty of Korea placed great value on a policy of "neighborly relations" (gyorin or kyorin) with the Jurchen people.

The Jurchens generally lived by traditions that reflected the pastoral culture of early steppe peoples. Like the Khitans and Mongols, they took pride in feats of strength, horsemanship, archery and hunting. They engaged in shamanic cults and believed in a supreme sky god.

The early Jurchen script was based on the Khitan script, which in turn was inspired by Chinese characters. The written Jurchen language died out soon after the fall of the Jin Dynasty though its spoken form survived. Until the end of the sixteenth century, when Manchu became the new literary language, the Jurchens used a combination of Mongolian and Chinese.

The culture of Jurchen society owes a great deal to the Mongols. Also like the Mongols and the Turks, the Jurchens did not observe a law of the right of succession belonging to the firstborn child. According to tradition, any capable son or nephew could be chosen to become leader.

Although their ancestors did not respect dogs, the Jurchens began to respect dogs around the time of the Ming dynasty and passed this tradition on to the Manchus. It was prohibited in Jurchen culture to use dog skin, and forbidden for Jurchens to harm, kill, or eat dogs. The Jurchens believed that the "utmost evil" was the usage of dog skin by Koreans.

All content from Kiddle encyclopedia articles (including the article images and facts) can be freely used under Attribution-ShareAlike license, unless stated otherwise. Cite this article:
Jurchen people Facts for Kids. Kiddle Encyclopedia.