Time in China facts for kids 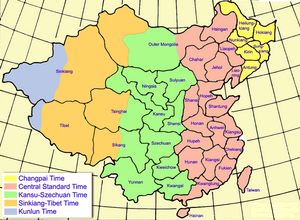 There is one time zone named China Standard Time (CST) or Beijing Standard Time. It is 8 hours ahead of Coordinated Universal Time (UTC), but Xinjiang (East Turkestan) unofficially uses UTC+06:00. Since 1992, there has been no daylight saving time.

China used to have five time zones, but now it has one.

Some Chinese people say the usage of UTC+08:00 is harmful, and that China should have five time zones as in the country's west, (especially in Xinjiang) see sunrises as late 10 a.m., making children go to school in the dark, and sunsets in the summer as late as midnight.

All content from Kiddle encyclopedia articles (including the article images and facts) can be freely used under Attribution-ShareAlike license, unless stated otherwise. Cite this article:
Time in China Facts for Kids. Kiddle Encyclopedia.