Qingdao is a major city in the east of Shandong Province on China's Yellow Sea coast. It is also a major nodal city of the One Belt, One Road (OBOR) Initiative that connects Asia with Europe. It has the highest GDP of any city in the province. Administered at the sub-provincial level, Qingdao has jurisdiction over six districts and four county-level cities. As of 2014[update], Qingdao had a population of 9,046,200 with an urban population of 6,188,100. Lying across the Shandong Peninsula and looking out to the Yellow Sea, it borders Yantai to the northeast, Weifang to the west and Rizhao to the southwest.

Qingdao is a major seaport, naval base, and industrial centre. The world's longest sea bridge, the Jiaozhou Bay Bridge, links the main urban area of Qingdao with Huangdao district, straddling the Jiaozhou Bay sea areas. It is also the site of the Tsingtao Brewery, the second largest brewery in China.

In 2018, Qingdao ranked 31st in the Global Financial Centres Index published by the Z/Yen Group and China Development Institute, the other Chinese cities on the list being Hong Kong, Shanghai, Beijing, Shenzhen, Guangzhou, Tianjin, Chengdu, Hangzhou and Dalian. In 2007, Qingdao was named as one of China's top ten cities by the Chinese Cities Brand Value Report, which was released at the 2007 Beijing Summit of China Cities Forum. In 2009, Qingdao was named China's most livable city by the Chinese Institute of City Competitiveness. In 2018, Qingdao held the Shanghai Cooperation Organization summit. 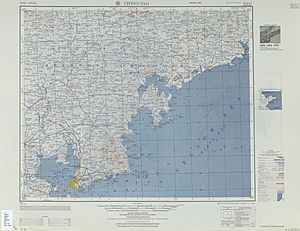 Qingdao is located on the south facing coast of the Shandong Peninsula (German: Schantung Halbinsel). It borders three prefecture-level cities, namely Yantai to the northeast, Weifang to the west, and Rizhao to the southwest. The city's total jurisdiction area occupies 10,654 square kilometres (4,114 sq mi), and stretches in latitude from 35° 35' to 37° 09' N and in longitude from 119° 30' to 121° 00' E. The populated sections of the city are relatively flat while mountains spur up within city limits and nearby. The highest elevation in the city is 1,133 metres (3,717 ft) above sea level. Of the total area of Qingdao, 15.5% is highland, while the foothill, plain and lowland areas constitute 25.1%, 37.8% and 21.7%. The city has a 730.64 kilometres (454.00 mi) coastline. Five significant rivers that flow for more than 50 kilometres (31 mi) can be found in the region.

Qingdao has a temperate, four-season, monsoon-influenced climate that lies in the transition between the humid subtropical (Köppen Cwa) and humid continental (Köppen Dwa) regimes, but favouring the former. Winter is cool to cold and windy, but generally dry, with a January average of −0.2 °C (31.6 °F). Summer is generally hot and humid, but very hot days are rare, with an August average of 25.4 °C (77.7 °F). Due to its proximity to the coast and being on a peninsula, it experiences a one-month delayed spring compared to most inland areas of China, and the annual diurnal temperature variation is only 6.3 °C (11.3 °F). Conversely, autumn is milder than inland areas in Shandong. The water temperature peaks at about 25 °C (77 °F) in late August, with swimming possible two months on either side. The annual mean temperature is 13.0 °C (55.4 °F). Extremes since 1951 have ranged from −15.5 °C (4 °F) on 16 January 1958 to 38.9 °C (102 °F) on 15 July 2002.

During the summer months, the beaches of Qingdao are afflicted by massive algal blooms. The decomposing algae release large amounts of hydrogen sulfide gas, which gives off the odour of rotten eggs. The blooms of sea lettuce, which are partially caused by seaweed farming in Jiangsu Province, led local officials to declare a "large-scale algae disaster" in 2013.

By the end of 2006, Qingdao was estimated to be the home of about 8 million inhabitants, of which around 3 million reside in the Qingdao urban area. Another estimated 5 million live in other cities under Qingdao's jurisdiction. The annual birth rate is calculated around 76,507, with a birth rate of 10.15 per year per thousand, and a death rate of 6.32, both calculated on an annual basis. Living standards are among the highest of leading Chinese cities due to the strong export economy and relatively high family wages.

Qingdao is home to 38 Chinese ethnic minorities, which account for 0.14% of the city's total population.

There is a large Korean community in Qingdao. By 2009, there were approximately 100,000 Koreans working, studying and living in Qingdao, which makes Qingdao the second in terms of Korean population in China, following Beijing which has about 200,000 Koreans. 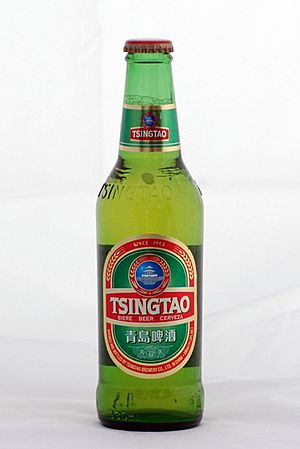 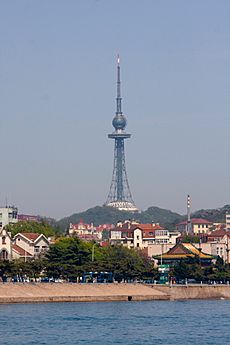 An important region in Eastern China, Shandong Province has seen substantial change in its economic landscape in recent years. Much of this development has been concentrated in Qingdao. Qingdao has seen rapid development. With an annual growth rate of 18.9 percent in 2006, the city's GDP reached 42.3 billion, ranking first in Shandong Province and tenth out of China's top 20 cities. GDP per capita comprised ¥52,895 (US$7,616) in 2008. The GDP has grown steadily at an average pace of 16% annually. In 2006, Qingdao was ranked one of six "golden cities" by the World Bank, out of 120 Chinese cities assessed on factors including investment climate and government effectiveness.

Internationally, Qingdao is perhaps best known for its Tsingtao Brewery, founded by a German-British joint venture in 1903 that produces Tsingtao beer, the best-known Chinese export beer. It is also home to Haier, a large white goods manufacturer, and Hisense, a major electronics company. In 2002 guitar manufacturers Epiphone opened a factory in Qingdao.

In 1984 the Chinese government named a district of Qingdao a Special Economic and Technology Development Zone (SETDZ). Along with this district, the entire city had gone through amazing development of secondary and tertiary industries. As an important trading port in the province, Qingdao flourishes with foreign investment and international trade. South Korea and Japan in particular made extensive investment in the city. Approximately 80,000 South Korean citizens reside there.

In terms of primary industry, Qingdao has an estimated 50,000 acres (200 km2) of arable land. Qingdao has a zigzagging pattern coastline, and thus possesses an invaluable stock of fish, shrimp, and other sea resources.

Qingdao is also home to a variety of mineral resources. Up to thirty different kinds have been mined.

Qingdao's wind power electricity generation performs at among the highest levels in the region.

There are a total of 1,145 km (711 mi) of roads in the Qingdao area, with nearly 500 km (310 mi) of expressways. These National Trunk Highway System (NTHS) Expressways begin or pass through in Qingdao. Expressways that begin in Qingdao are in Bold:

These provincial expressways begin in or pass through Qingdao. Expressways that begin in Qingdao are in Bold:

On June 30, 2011, the longest bridge over water opened in Qingdao. The bridge, Haiwan Bridge, is 26.4 miles (42.5 km) long and connects Qingdao to an offshore island, Huangdao. It would easily cross the English Channel and is almost three miles (4.8 km) longer than the previous record-holder, the Lake Pontchartrain Causeway in the American state of Louisiana. Haiwan Bridge is supported by more than 5,000 pillars and costs about 10 billion yuan which is about 1.5 billion dollars. The bridge was designed by the Shandong Gausu Group and the construction lasted for four years. Haiwan Bridge cut the commute between the city of Qingdao and the sprawling suburb of Huangdao by 30 minutes. At least 10,000 workers toiled in two teams around the clock to build the bridge, which was constructed from opposite ends. On the same day, the Jiaozhou Bay Tunnel opened. The tunnel brought much convenience to people by supporting public buses and making transport between the two areas more convenient.

Qingdao (official name: Qingdao port international co. ltd.) hosts one of the world's busiest seaports. Cooperative relations have been established with 450 ports in 130 countries worldwide. In 2003, the annual cargo handling capacity exceeded 100 million tons for the first time. The number of containers reached 3.41 million twenty-foot equivalent units (TEU) of cargoes. By 2011, the port had become the world’s sixth-busiest by Total Cargo Volume, having handled 372 million tonnes of cargo in that year. As of 2016, it was the 8th in the world in terms of TEUs (Twenty Foot Equivalent Units). 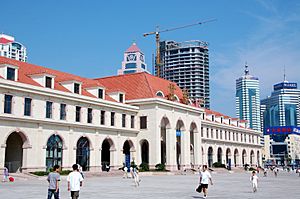 Qingdao's railway development was picked up during the late 1990s. It is at the beginning of the Jiaoji Railway. Qingdao's city proper has some major railway stations, Qingdao Station, Sifang Station, Cangkou Station, Great-Seaport Station, etc.

Qingdao's public traffic owns 5283 large and medium-sized buses, CNG buses as of 2012[update].There are also 136 trolleybuses as of 2012[update]. All of the buses and trolleybuses can be accessed using the Qingdao Public Traffic IC Card (青岛卡), which uses radio frequencies so the card does not have to physically touch the scanner. Non air-conditioned busses cost 1 yuan, The volume of road passenger transport approaches 0.8 billion per year. The Public Transport Brand of 'Ri-Xin Bus (日新巴士)' is also known in China.

The Qingdao Tram system is operating in Chengyang District

Qingdao Tram, is a tram system operating in Chengyang District, Qingdao, China. It opened in 2016. The Qingdao Public Transport Group Rail Bus Co., Ltd. is responsible for operation and management.

Qingdao is headquarters of the North Sea Fleet of the People's Liberation Army Navy. 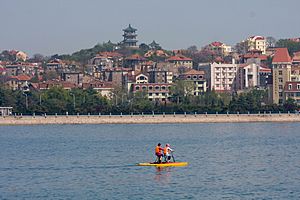 Qingdao retains many buildings with a German architectural style

There is a large number of German-style buildings in Qingdao city centre, remarkable considering the German colonial period only lasted 16 years (1898–1914). The unique combination of German and Chinese architecture in the city centre, combined with German demographic roots and a large Korean expatriate population, gives Qingdao a distinct atmosphere. An old saying described Qingdao as a city of "red tiles green trees, blue sky and blue sea." This saying indeed gives a picture of bird view of Qingdao. A larger number of areas in former foreign styles are well preserved. Although the new city area is under large-scale reconstruction, the old city area (especially the western part of Shinan District) still retains many traditional buildings. 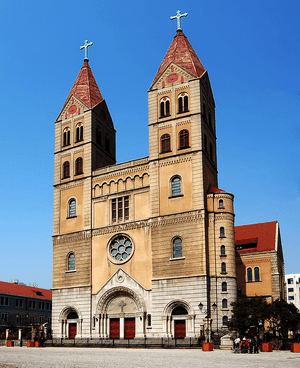 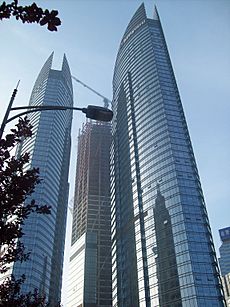 During the city's colonial days, German was the official language and rigorously taught and promoted. Since the demise of Germany's colonial empire during World War I, the German language is all but gone, leaving little impact on the local languages. A local accent known as Qingdao dialect (青岛话, pinyin qingdao hua) distinguishes the residents of the city from those of the surrounding Shandong province. Due to the efforts by the city government to promote standard Mandarin, most educated people can speak standard Mandarin in addition to their native dialect. With reform policies and English teaching, some young citizens have been taught English and many can converse with English-speaking foreigners. Business and traffic signs in English are becoming more and more common.

The distinctive cuisine of the area is Lu Cai, the Shandong regional style. 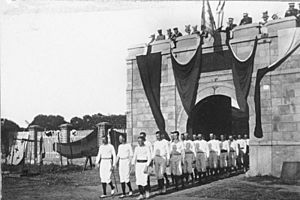 The German sports festival Turnerfest in Qingdao in 1913

A 1912 publication of the United States Department of Commerce, Bureau of Foreign and Domestic Commerce said that the Tageblatt für Nordchina of Tianjin was read in Qingdao, and that major newspapers from Shanghai were also read in Qingdao.

Qingdao attracts many tourists due to its seaside setting and temperate weather. Parks, beaches, sculptures and unique German and modern architecture line the shore. The central tourist information, the Qingdao Information Centre for International Visitors, is located on Middle Hong Kong Road (香港中路).

Other districts of Qingdao

All content from Kiddle encyclopedia articles (including the article images and facts) can be freely used under Attribution-ShareAlike license, unless stated otherwise. Cite this article:
Qingdao Facts for Kids. Kiddle Encyclopedia.