The city has a complex recorded history, partially due to the combined regional importance of the usually ice-free Port of Klaipėda at the mouth of the Akmena-Danė River. It was controlled by successive German states until the 1919 Treaty of Versailles.

As a result of the 1923 Klaipėda Revolt it was annexed by Lithuania and has remained with Lithuania to this day, except for the period between 1939 and 1945 when it returned to Germany following the 1939 German ultimatum to Lithuania and the German–Soviet Union Molotov–Ribbentrop Pact. Klaipėda remained part of Lithuania after it again became independent state.

The Port of Klaipėda is the principal ice-free port on the eastern coast of the Baltic Sea. It is the most important Lithuanian transportation hub, connecting sea, land and railway routes from East to West. The port operates 24 hours a day, seven days a week, all year round.

Popular seaside resorts found close to Klaipėda are Nida to the south on the Curonian Spit, and Palanga to the north. 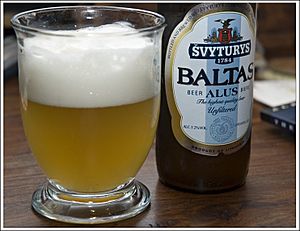 Klaipėda is famous for Švyturys brewery, established in 1784

Klaipėda is an industry, business, education and science, health, tourism and recreation, administrative center. Historically, Klaipėda is one of the most successful developing municipalities in the Western Lithuania.

The city generates approximately 12 percent of the country GDP and about 80 percent of the Western Lithuania. It is greatly influenced due to the Port of Klaipėda which is a very important transport hub.

In the eastern part of the city there is Klaipėda Free Economic Zone offering 0 percent tax incentives for first 6 years, it is also the location of the first Geothermal Demonstration Plant in the Baltic States, which is supplying the city with geothermal heating and Fortum Klaipėda Combined Heat and Power Plant. 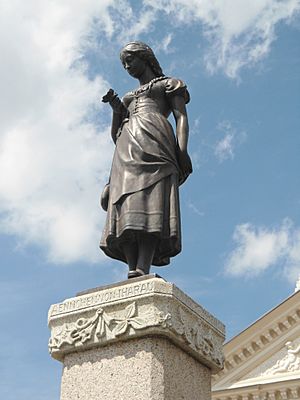 One of most popular places in Klaipėda‘s old town is The Theatre Square which hosts a variety of concerts, the Sea Festival, the International Jazz Festival and other events. An important focus of the Theatre Square is the Taravos Anikė sculpture depicting a youthful barefoot girl. The sculpture was erected in the memory of the poet Simonas Dachas.

The maritime museum with six different exhibitions is set in a former nineteenth-century fortification of the Spit. In the Maritime Museum, there is a huge aquarium, the exhibitions of marine fauna, mammals and seabirds. 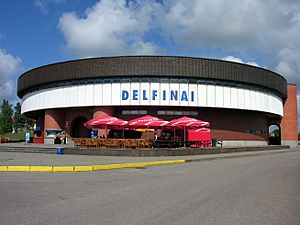 The aquarium is populated with invertebrates, and freshwater fish of Lithuania – many species, not only from the Baltic Sea, but also from various tropical seas. The museum’s courtyard has a pool filled with seals, sea lions, and penguins. The marine fauna exhibition has diverse exhibits: mollusk shells, various fossils, algae and other special exhibits, surviving the prehistorical dinosaur times.

Klaipėda's main attractions are the historic buildings in the city's centre, dating from the 13th to 18th centuries. Some of its older buildings have picturesque half-timbered construction, similar to that found in Germany, France, England, Denmark and southern Sweden.

All content from Kiddle encyclopedia articles (including the article images and facts) can be freely used under Attribution-ShareAlike license, unless stated otherwise. Cite this article:
Klaipėda Facts for Kids. Kiddle Encyclopedia.