Regensburg is a city in south-east Germany, at the confluence of the Danube, Naab and Regen rivers. With more than 150,000 inhabitants, Regensburg is the fourth-largest city in the State of Bavaria after Munich, Nuremberg and Augsburg. The city is the political, economic and cultural centre and capital of the Upper Palatinate.

The medieval centre of the city is a UNESCO World Heritage Site. In 2014, Regensburg was among the top sights and travel attractions in Germany. 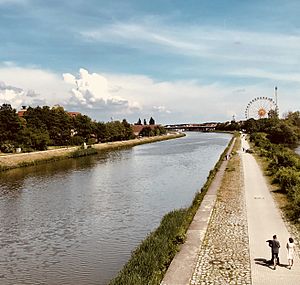 Regensburg is situated on the northernmost part of the Danube river at the geological crossroads of four distinct landscapes:

Regensburg straddles the humid continental (Dfb) and oceanic (Cfb) climate zones under the Köppen climate classification. While the average temperature of 8.5 °C (47.3 °F) in the period from 1971-2000 is slightly above the German average (7.8 °C or 46.0 °F), still only 5 of the 80 cities in Germany above 100000 inhabitants are colder. The average precipitation of 636 millimetres (25.0 inches) per year ranges slightly below the German average (approximately 700 millimetres or 28 inches ). For the newer period from 1981-2010 the average temperature and precipitation rose up to 8.9 °C (48.0 °F) respectively 658 millimetres (25.9 inches). As this increase in the average temperature can also be seen in the other cities, Regensburg still ranks fifth place (shared with Ingolstadt and Kiel) in the above-mentioned ranking. With a total of 1670 sunshine hours per year, Regensburg is roughly 120 hours above German average. 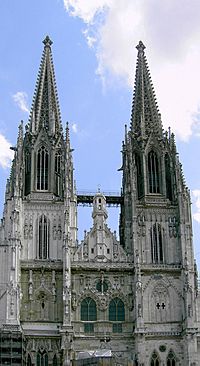 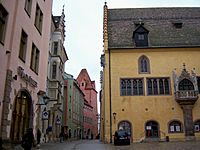 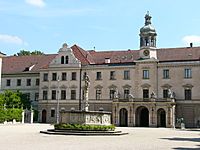 Regensburg includes the largest medieval old town north of the Alps with nearly 1,500 listed buildings and a picturesque cityscape. Its most famous sights are located mainly in the Old Town, such as:

The Stone Bridge, St. Peter's Church and the Old Town of Regensburg 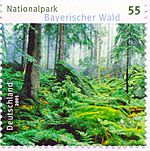 Near Regensburg there are two very imposing Classical buildings, erected by Ludwig I of Bavaria as national monuments to German patriotism and greatness:

Besides, there is the famous Weltenburg Abbey (Kloster Weltenburg), a Benedictine monastery in Weltenburg near Kelheim on the Danube. The abbey is situated on a peninsula in the Danube, on the so-called "Weltenburg Narrows" or "Danube Gorge". The monastery, founded by Irish or Scottish monks in about 620, is held to be the oldest monastery in Bavaria.

To the east of Regensburg lies the Bavarian Forest with its National Park, one of the most visited protected areas in Germany.

Regensburg is on the designated heritage route, the Route of Emperors and Kings.

All content from Kiddle encyclopedia articles (including the article images and facts) can be freely used under Attribution-ShareAlike license, unless stated otherwise. Cite this article:
Regensburg Facts for Kids. Kiddle Encyclopedia.