The city is known worldwide for Pilsner beer, created by Bavarian brewer Josef Groll there in 1842. 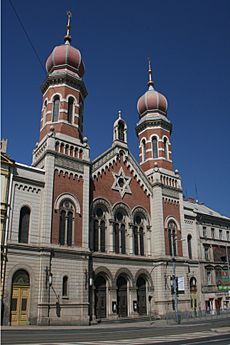 Plzeň was first mentioned as a castle in 976, as the scene of a battle between Duke Boleslaus II the Pious of Bohemia and Emperor Otto II. It became a town in 1295 when King Wenceslaus II granted Plzeň its civic charter as a "Royal City" and established a new town site, some 10 km (6 mi) away from the original settlement, which is the current town of Starý Plzenec. It quickly became an important town on trade routes leading to Nuremberg and Regensburg; in the 14th century, it was the third-largest town in Bohemia after Prague and Kutná Hora. During the Hussite Wars, it was the centre of Catholic resistance to the Hussites: Prokop the Great unsuccessfully besieged it three times, and it joined the league of Catholic nobles against King George of Podebrady. In 1468, the town acquired a printing press; the Trojan Chronicle (Kronika trojánská in Czech), the first book published in Bohemia, was printed on it.

Emperor Rudolf II made Plzeň his seat from 1599–1600. During the Thirty Years' War the town was taken by Mansfeld in 1618 after the Siege of Plzeň and it was not recaptured by Imperial troops until 1621. Wallenstein made it his winter quarters in 1633. The town was unsuccessfully besieged by the Swedes in 1637 and 1648. The town and region have been staunchly Catholic despite the Hussite Wars.

From the end of the 17th century, the architecture of Plzeň has been influenced by the Baroque style. The city centre has been under cultural heritage preservation since 1989.

In the second half of the 19th century Plzeň, already an important trade centre for Bohemia, near the Bavarian/German border, began to industrialise rapidly. In 1869 Emil Škoda started up the Škoda Works, which became the most important and influential engineering company in the country and a crucial supplier of arms to the Austro-Hungarian Army. By 1917 the Škoda Works employed over 30,000 workers. After 1898 the second largest employer was the National Railways train workshop, with about 2,000 employees: this was the largest rail repair shop in all Austria-Hungary. Between 1861 and 1877, the Plzeň railway junction was completed and in 1899 the first tram line started in the city. This burst of industry had two important effects: the growth of the local Czech (Slavic) population and of the urban poor. After 1868 first Czech mayor of the city was elected.

Following Czechoslovak independence from Austria-Hungary in 1918 the German-speaking minority in the countryside bordering the city of Plzeň hoped to be united with Austria and were unhappy at being included in Czechoslovakia. Many allied themselves to the Nazi cause after 1933, in the hope that Adolf Hitler might be able to unite them with their German-speaking neighbours.

Following the Munich Agreement in 1938, Plzeň became literally a frontier town, after the creation of the Sudetenland moved the Third Reich borders to the city's outer limits. During the Nazi occupation from 1939 to 1945 the Škoda Works in Pilsen was forced to provide armaments for the Wehrmacht, and Czech contributions, particularly in the field of tanks, were noted.

Between 17 and 26 January 1942, over 2,000 Jewish inhabitants, most of Plzeň's Jewish population, were deported by the Nazis to the Theresienstadt concentration camp.

The German-speaking population was forcibly expelled from the city and indeed all of Czechoslovakia after the end of the war in 1945, according to the provisions of the Potsdam agreement. All of their property was confiscated.

On 6 May 1945, near the end of the Second World War, Plzeň was liberated from Nazi Germany by the 16th Armored Division of General Patton's 3rd Army. Also participating in the liberation of the city were elements of the 97th and 2nd Infantry Divisions supported by the Polish Holy Cross Mountains Brigade. Other Third Army units liberated major portions of Western Bohemia. The rest of Czechoslovakia was liberated from German control by the Soviet Red Army. Elements of the 3rd Army, as well as units from the 1st Army, remained in Plzeň until late November 1945, assisting the Czechs with rebuilding.

After the Communist Party of Czechoslovakia coup of February 1948, the Czechoslovak government launched a currency reform in 1953. This reform caused a wave of discontent, including the Plzeň uprising. On 1 June 1953 over 20,000 people, mainly workers at the Škoda Works, began protesting against the government. Protesters forced their way into the town hall and threw communist symbols, furniture and other objects out of the windows. The protest caused a retaliation from the government; as part of their retaliation, they destroyed the statue of Tomáš Garrigue Masaryk. The statue has since been re-erected.

The next year, a West German homing pigeon was lost near the Czechoslovak border. It returned two days later, bearing a strong anti-communist message, signed "Unbowed Pilsen." The bird, named Leaping Lena, was taken to the United States where it was celebrated as a Cold War hero.

Plzeň has a cool and temperate Oceanic climate (Cfb). Plzeň has low rainfall (604 mm (24 in) year average) evenly spread over the year. Precipitation occurs on average every second day, and the number of days with thunderstorms is 19. It receives on average 1700 hours of sunshine though winters have longer periods without sunshine. Terrain features and a relatively low altitude (290 to 390 m (950 to 1,280 ft)) give some shelter from strong winds. Winters are chilly but milder than some adjacent areas. Snow cover is erratic and lasts on average for 51 days. Though an average year has 113 days with minimum temperature below zero, the temperature falls below −15 °C (5 °F) on 5 days. The record low temperatures is around −20 °C (−4 °F). Winters are often murky with frequent long-standing haze. Spring is short, and in April to June there is blooming vegetation. Summer lasts from the end of May until the first third of September. During that period Plzeň has changeable weather which can be warm to hot. Temperatures are always above 5 degrees Celsius with nights between 8 to 18 °C (46 to 64 °F) and days between 16 to 35 °C (61 to 95 °F). Days are up to 16 hours long. Plzeň can be hot, especially during heat waves originating in the southern Mediterranean. The number of hot days above 30 °C (86 °F) is steadily growing, with 5 months (late April – early September) of possible 30+ °C days. If hot weather does occur, it is often changes after a few weeks into cold and rainy weather with incoming Atlantic-based fronts. Nights can be unpleasantly cold even in summer, with high level of humidity. Winter frosts frequently occur from the second half of November to the end of March. February is the driest month with 32 mm (1.3 in) of precipitation, and July the wettest with 80 mm (3.1 in). The only natural hazards are occasional fast changes of weather with negative consequences, e.g. floodings.

All content from Kiddle encyclopedia articles (including the article images and facts) can be freely used under Attribution-ShareAlike license, unless stated otherwise. Cite this article:
Plzeň Facts for Kids. Kiddle Encyclopedia.