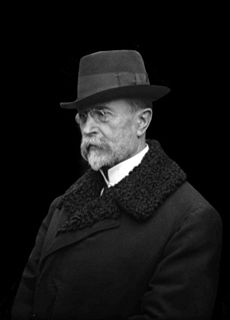 Tomáš Garrigue Masaryk (7 March 1850 - 14 September 1937) was the first President of Czechoslovakia. He led the country between years 1918 and 1935. He was a scientist, philosopher, pedagog, politician, and journalist. He studied in Brno, Vienna, and Leipzig, and he spoke many languages (Latin, French, Polish, German and English). He worked as a teacher at a university in Prague and Vienna. He had a big persona with huge charisma and he is called "President liberator" and "Daddy".

Edvard Beneš was the next president after him.

All content from Kiddle encyclopedia articles (including the article images and facts) can be freely used under Attribution-ShareAlike license, unless stated otherwise. Cite this article:
Tomáš Garrigue Masaryk Facts for Kids. Kiddle Encyclopedia.