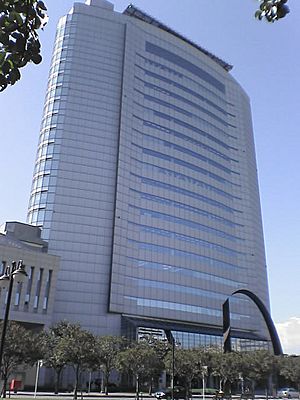 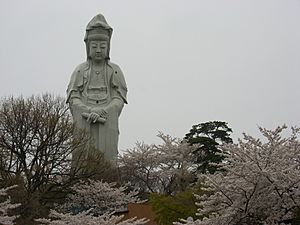 Takasaki is a city located in Gunma Prefecture, Japan. As of October 1, 2019, the city had an estimated population of 368,667, and a population density of 803 persons per km². Its total area is 459.16 square kilometres (177.28 sq mi). Takasaki is famous as the hometown of the Daruma doll, theoretically representing the Buddhist sage Bodhidharma and in modern practice a symbol of good luck.

During the Edo period, the area of present-day Takasaki was the center of the Takasaki Domain, a feudal domain held by a branch of the Matsudaira clan under the Tokugawa shogunate in Kōzuke Province. The area also prospered from its location on the Nakasendō highway connecting Edo with Kyoto. Post stations located within the borders of modern Takasaki were: Shinmachi-shuku, Kuragano-shuku, and Takasaki-shuku. Following the Meiji Restoration, Takasaki was briefly capital of Gunma Prefecture, before the capital was moved to Maebashi in 1881.

Takasaki Town was created within Gunma District, Gunma on April 1, 1889 with the creation of the municipalities system. It was raised to city status on April 1, 1900. On April 1, 1927, Takasaki annexed the neighboring villages of Tsukasawa and Kataoka, followed by Sano on October 1, 1937. The city largely escaped damage in World War II. Following the war, it continued to expand its borders by annexing the village of Rokugo on April 1, 1951, Shintakao and Nakamura as well as Yawata and Toyooka from Ushi District on January 20, 1955. This was followed by Orui village and Sano village from Tano District on September 30, 1956. The city celebrated its 360th anniversary in 1963 and annexed the town of Kuragano on March 31 of the same year. On September 1, 1965 the village of Gunnan was annexed.

On April 1, 2001 Takasaki was proclaimed a Special City (Tokurei-shi), which gave it greater autonomy.

Takasaki was elevated to a Core city with even greater autonomy on April 1, 2011.

Takasaki is located in the southwestern part of Gunma Prefecture in the flat northern part of the Kantō Plain.

Takasaki is a regional commercial center and transportation hub, and is a major industrial center within Gunma Prefecture. Companies headquartered in Takasaki include:

Takasaki is twinned with:

All content from Kiddle encyclopedia articles (including the article images and facts) can be freely used under Attribution-ShareAlike license, unless stated otherwise. Cite this article:
Takasaki Facts for Kids. Kiddle Encyclopedia.