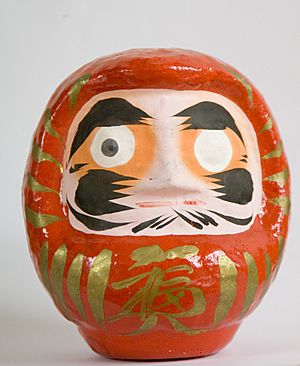 The Daruma (達磨code: ja is deprecated , daruma) doll is a hollow, round, traditional Japanese doll. It is modeled after Bodhidharma, the founder of the Zen sect of Buddhism.

The Daruma dolls are a kind of toy (omocha). The Daruma figurine is also a tumbler doll or roly-poly toy. When the doll is tumbled about, it rights itself. The two were well recognized as synonymous by the mid-19th century. Today, Daruma dolls are widely known, regardless of religion or sect.

Dolls are sold without the eyes painted in. The custom is to make a resolution or a wish and darken the left eye of the daruma. When the resolution or the wish is fulfilled, the right eye is also darkened. This custom is seen widely today especially in the case of election or entrance examination in.

All content from Kiddle encyclopedia articles (including the article images and facts) can be freely used under Attribution-ShareAlike license, unless stated otherwise. Cite this article:
Daruma doll Facts for Kids. Kiddle Encyclopedia.