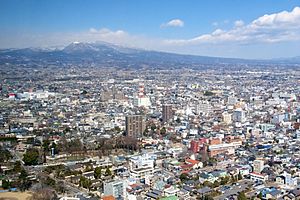 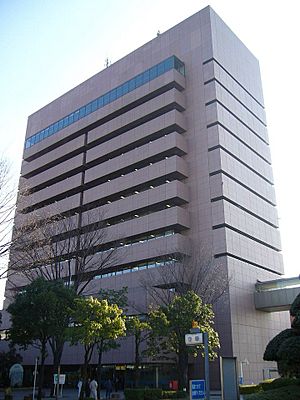 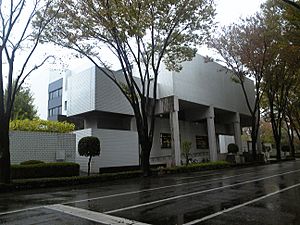 Maebashi (前橋市, Maebashi-shi) is a Japanese city in the Kantō region on the island of Honshu. It is the capital city of Gunma Prefecture.

It has been recognized as a core city since 2009.

Hagiwara Sakutaro is famous poet who was born in Gunma. His most famous work "tsuki ni hoeru" was published in 1917. "Sakutaro kinen kan" is a memorial museuum in Maebashi.

Rinkokaku is a wooden building which was built in 1884. It is an important cultural property.

"Misopan", meaning “Bread with Miso paste” originates from Yakimanju. Friand, Numata, is famous for Misopan. The buns are made from Gunma Prefecture’s high quality wheat. Azuki bean paste is not used, but rather, a spread of miso with sugar, which is then grilled until brown.

The prefectural office building was formed from Maebashi castle. It was renovated in 1999, and became the tallest building in Maebashi.

All content from Kiddle encyclopedia articles (including the article images and facts) can be freely used under Attribution-ShareAlike license, unless stated otherwise. Cite this article:
Maebashi, Gunma Facts for Kids. Kiddle Encyclopedia.