Kids Encyclopedia Facts
This page is about the city. For the adjacent former town, see Menasha (town), Wisconsin.

Menasha is a city in Calumet and Winnebago counties in the U.S. state of Wisconsin. The population was 17,353 at the 2010 census. Of this, 15,144 were in Winnebago County, and 2,209 were in Calumet County. The city is located mostly in Winnebago County; only a small portion is in the Town of Harrison in Calumet County. Doty Island is located partially in Menasha. The city's name comes from the Winnebago word meaning "thorn" or "island". In the Menominee language, it is known as Menāēhsaeh, meaning "little island". Menasha is home to the Barlow Planetarium and Weis Earth Science Museum, both housed at the University of Wisconsin-Fox Valley. 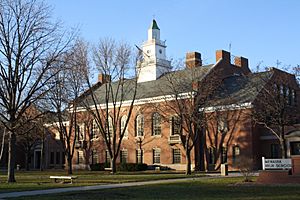 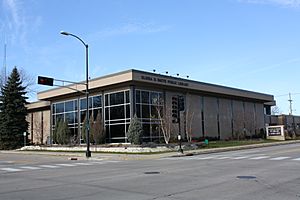 All content from Kiddle encyclopedia articles (including the article images and facts) can be freely used under Attribution-ShareAlike license, unless stated otherwise. Cite this article:
Menasha, Wisconsin Facts for Kids. Kiddle Encyclopedia.