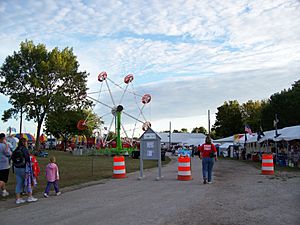 Calumet County is a county located in the U.S. state of Wisconsin. As of the 2020 census, the population was 52,442. The county seat is Chilton. The county was created in 1836 (then in the Wisconsin Territory) and organized in 1850.

The Holyland is partially located in southern Calumet County.

The county's name originated from the word calumet, the French name for the ceremonial pipes used by Native Americans in councils on the east shore of Lake Winnebago.

In the 1830s, the United States government relocated Native Americans from New York and New England to the southwest part of the county; these included the Brothertown Indians, Oneida Indians, and Stockbridge-Munsee Indians. This was a second migration for the Brothertown and Stockbridge Indians, who had moved to New York after the American Revolutionary War. The Oneida shared land on their reservation with these peoples, who had been displaced by the years of colonization in New England, warfare and disease. Each of the three groups are federally recognized with reservations in Wisconsin.

Many of the early European residents in the Holyland region in the southern part of the county were emigrants from the Schleswig-Holstein region in Germany in the 1840s.

Calumet County figures prominently in the 2015 Netflix television series Making a Murderer, which documents the arrests and trials of Manitowoc County resident Steven Avery, which involves from 2005 the Calumet sheriff's department and district attorney's office of Ken Kratz.

According to the U.S. Census Bureau, the county has a total area of 397 square miles (1,030 km2), of which 318 square miles (820 km2) is land and 79 square miles (200 km2) (20%) is water. It is the fifth-smallest county in Wisconsin by land area and fourth-smallest by total area. The west boundary is largely in Lake Winnebago. The Niagara Escarpment runs north-south several miles east of the western boundary. The topography has been greatly influenced by glaciation. 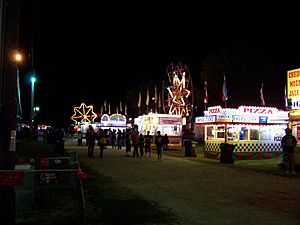 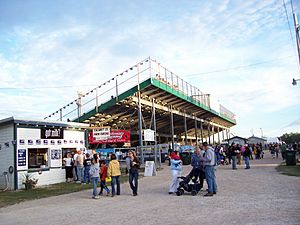 Grandstands during the 2006 Calumet County Fair 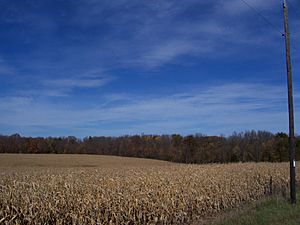 Typical mix of rolling fields and woods in fall 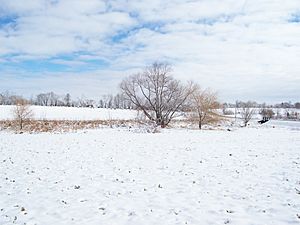 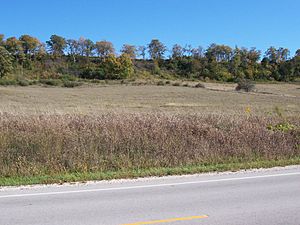 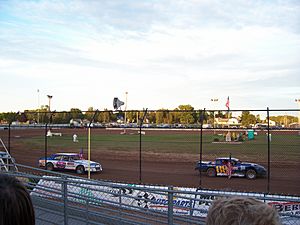 Stock cars at the county fairgrounds 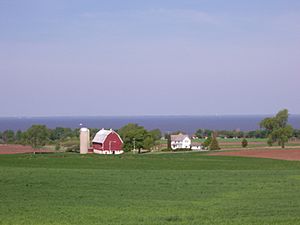 Nearly the entire west boundary of the county is located in Lake Winnebago. The first non-natives to enter the county most likely came in the county from the lake through the Fox River. The Manitowoc River and Sheboygan River both run through the county and flow into Lake Michigan through neighboring counties.

The west boundary of the county is located almost entirely in Lake Winnebago. Boaters use the lake for recreational boating and fishing in the summer. The lake is the site of ice fishing in the winter, and the Wisconsin Department of Natural Resources manages a sturgeon spearing season in February.

The University of Wisconsin–Extension has compiled statistics on Calumet County's dairy industry. Calumet County has more bovines (cattle and calves) than people. As of 2010 there are 28,600 head of dairy cows and 65,000 head of bovine total (that includes dairy cows, beef cattle, and calves.) 73% of land in the county is owned by farmers. 2400 residents are employed in farming. Agriculture results in $338 million in economic activity, and it contributes $68.2 million in income to the county total income (including $7.2 million towards taxes). As of 2007, 99.3% of farms are owned by individuals, families, family partnerships or family corporations. Only 0.7% are owned by non-family corporate entities. As of April 1, 2010, Calumet county had 174 farms with dairy herd licenses.

In 1931, the Wisconsin Department of Agriculture described Calumet County as "one of the most important producers of American cheese among the counties of Wisconsin."

All content from Kiddle encyclopedia articles (including the article images and facts) can be freely used under Attribution-ShareAlike license, unless stated otherwise. Cite this article:
Calumet County, Wisconsin Facts for Kids. Kiddle Encyclopedia.