Appleton is a city in Outagamie (mostly), Calumet, and Winnebago counties in the U.S. state of Wisconsin. One of the Fox Cities, it is situated on the Fox River, 30 miles (48 km) southwest of Green Bay and 100 miles (160 km) north of Milwaukee. Appleton is the county seat of Outagamie County. The population was 72,623 at the 2010 census. Of this, 60,045 were in Outagamie County, 11,088 in Calumet County, and 1,490 in Winnebago County. Appleton is the principal city of the Appleton, Wisconsin Metropolitan Statistical Area, which is included in the Appleton-Oshkosh-Neenah, Wisconsin Combined Statistical Area. The city possesses the two tallest buildings in Outagamie County, the Zuelke Building and 222 Building, at 168 and 183 feet, respectively.

Appleton serves as the heart of the Fox River Valley, and is home to the Fox Cities Performing Arts Center, Fox River Mall, Neuroscience Group Field at Fox Cities Stadium, Appleton International Airport, and the Valley's two major hospitals: St. Elizabeth Hospital and ThedaCare Regional Medical Center-Appleton. It also hosts a large number of regional events such as its Flag Day parade, Christmas parade, and others.

Fur traders seeking to do business with Fox River Valley Native Americans were the first European settlers in Appleton. Hippolyte Grignon built the White Heron in 1835 to house his family and serve as an inn and trading post.

Appleton was settled in 1847 and incorporated as a village in 1853. John F. Johnston was the first resident and village president. Home to Lawrence University, Appleton grew along with the school. With the financial backing of Amos A. Lawrence, the Lawrence Institute was chartered in 1847. Samuel Appleton, Lawrence's father-in-law from New England who never visited Wisconsin, donated $10,000 to the newly founded college library, and his name was given to the community in appreciation.

The paper industry, beginning with the building of the first paper mill in the city in 1853, has been at the forefront of the development of Appleton. In order to provide electricity to the paper industry, the nation's first hydro-electric central station, the Vulcan Street Plant on the Fox River, began operation on September 30, 1882. The power plant also powered the Hearthstone House, the first residence in the world powered by a centrally located hydroelectric station using the Edison system.

Shortly thereafter, in August 1886, Appleton was the site for another national first, the operation of a commercially successful electric streetcar company. Electric lights replaced gas lamps on College Avenue in 1912. Appleton also had the first telephone in Wisconsin, and the first incandescent light in any city outside of the East Coast.

Appleton's tallest building, the 222 Building was built in 1952. The Valley Fair Shopping Center, built in 1954, laid claim to being the first enclosed shopping mall in the United States, although this claim is disputed by other malls. In 2007 most of the structure was demolished, leaving only its east wing and a movie theater. A Pick 'n Save Food Center now stands in its place.

Sociologist James W. Loewen, in his book Sundown Towns: A Hidden Dimension of American Racism labeled Appleton a sundown town—a town that was intentionally all white. In these towns, black people were not allowed inside the town limits after dark.

In May 2016, a report by 24/7 Wall St. found that Appleton had the highest rate of self-reported binge and heavy drinking in the country.

Appleton has a humid continental climate typical of Wisconsin. Summers are warm to hot and winters are rather cold in comparison. Precipitation is relatively moderate compared to other areas close to the Great Lakes, which means lesser snowfall in winter than in many other cold areas.

A dew point of 90 °F was observed at Appleton at 5 p.m. on July 13, 1995. This is tied for the second highest dew point ever observed in the United States. 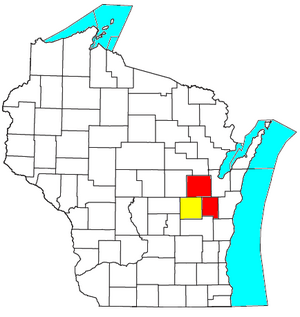 Appleton is the principal city of the Appleton–Oshkosh–Neenah CSA, a Combined Statistical Area which includes the Appleton (Calumet and Outagamie counties) and Oshkosh–Neenah (Winnebago County) metropolitan areas, which had a combined population of 367,365 at the 2010 census.

There were 28,874 households of which 33.0% had children under the age of 18 living with them, 48.7% were married couples living together, 10.5% had a female householder with no husband present, 4.1% had a male householder with no wife present, and 36.7% were non-families. 29.5% of all households were made up of individuals and 9% had someone living alone who was 65 years of age or older. The average household size was 2.43 and the average family size was 3.04.

There were 26,864 households out of which 35.0% had children under the age of 18 living with them, 53.9% were married couples living together, 8.7% had a female householder with no husband present, and 34.2% were non-families. 27.6% of all households were made up of individuals and 9.1% had someone living alone who was 65 years of age or older. The average household size was 2.52 and the average family size was 3.13.

The city is the owner of Valley Transit, a network of bus lines serving the Fox Valley. There are also several taxi operators in the city. Valley Transit operates routes that generally operate from as early as 5:45 AM until as late as 10:40 PM Monday through Saturday. Frequencies are usually every hour and every half-hour on certain routes during peak morning and afternoon times on weekdays. There is no service on Sunday. Greyhound and Lamers offer intercity buses serving such locations as Green Bay, Madison, Oshkosh, Fond du Lac, Milwaukee, and Chicago.

Appleton is criss-crossed by the former main lines of the Chicago and North Western Railway (southwest-northeast) and the Milwaukee, Lake Shore and Western (roughly southeast-northwest, and now largely abandoned except for local service to area paper mills and other industries). A north-south branch of the former Wisconsin Central Railroad passes on the west side of the city. All rail service is now operated by Canadian National Railway. Appleton has no intercity passenger rail service, although studies are being undertaken on the feasibility of extending Amtrak service to the Fox Cities and Green Bay.

The Appleton International Airport (ATW) is located at the west end of College Avenue, 2 miles west of Interstate 41 and 6 miles west of downtown.

Appleton tourist attractions include the Hearthstone House, the four-story mansion that was the first house in the world to be powered by hydroelectricity at its completion in 1881. The History Museum at the Castle contains exhibits on Fox River Valley history, including a gallery showcasing Edna Ferber, a Harry Houdini exhibit, and other travelling exhibits. The Paper Discovery Center has historic paper-making machines on display and an exhibit on the history of paper. The Fox River Mall is the second-largest mall in Wisconsin. Other local malls include Northland Mall, City Centre Plaza and formerly Valley Fair Shopping Center, aka Valley Fair Mall, disputedly the first enclosed shopping mall in America, opening in 1954.

In 2013, Houdini Plaza, on the corner of College Avenue and Appleton Street, was renovated. The project cost around $1.5 million with most of that paid by the city itself. The plaza, known as the 'front yard' of downtown Appleton holds roughly 55 events each year, including summer concerts and part of the downtown farmers market.

Memorial Park is the largest of the community parks, covering 139 acres. The park's facilities include: seven baseball/softball fields, playground equipment, an indoor ice skating rink, a sledding hill, a picnic pavilion, a catch and release fishing pond, grills, and a warming shelter. The park provides the firework display for the Appleton community during the 4th of July holiday.

City Park, established in 1882, is the oldest park in the Appleton park system. The Trout Museum of Art uses the park for its Art in the Park showcase. The show features over 200 artists that draw over 25,000 art enthusiasts annually. Pierce Park is the site of weekly Appleton City Band concerts held during the summer, and of the annual Appleton Old Car Show and Swap Meet. Pierce Park and Telulah Park each feature a disc golf course. Erb Park and Mead Park each feature a public aquatics facility. Jones Park is the site of the finish line for the Santa Scamper run held during the annual Appleton Christmas Parade, and features an outdoor hockey rink in the winter.

A view of the small World War I memorial on the south side of Appleton, including a restored copy of the Spirit of the American Doughboy.

All content from Kiddle encyclopedia articles (including the article images and facts) can be freely used under Attribution-ShareAlike license, unless stated otherwise. Cite this article:
Appleton, Wisconsin Facts for Kids. Kiddle Encyclopedia.