Kids Encyclopedia Facts
This page is about the city. For the adjacent town, see Neenah (town), Wisconsin. For the homophonically named city in Ireland, see Nenagh.

Neenah is a city in Winnebago County, Wisconsin, in the north central United States. It is situated on the banks of Lake Winnebago, Little Lake Butte des Morts, and the Fox River, approximately forty miles (60 km) southwest of Green Bay. Neenah's population was 27,319 at the 2020 census.

Neenah is bordered by the Town of Neenah. The city is the southwesternmost of the Fox Cities of northeast Wisconsin. It is the smaller of the two principal cities of the Oshkosh-Neenah Metropolitan Statistical Area, which is included in the Appleton-Oshkosh-Neenah Combined Statistical Area. It is sometimes referred to as a twin city with Menasha, with which it shares Doty Island.

Neenah was named by Governor James Duane Doty for the Winnebago word for "water" or "running water". It was the site of a Ho-Chunk village in the late 18th century. It is Nįįňą in the Hoocąk language.

The area was first designated an industrial and agricultural mission to the Menominee Indians in 1835, and early settlement by Americans of European descent began a few years later, stimulated in large part by the proximity of the area to the Fox River. 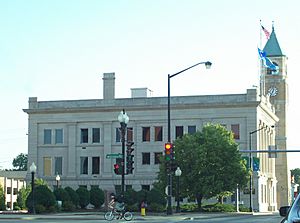 The Neenah Public Library, the clock tower, Shattuck Park, and the Neenah Centers. 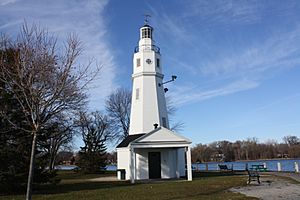 Neenah Light on the Fox River 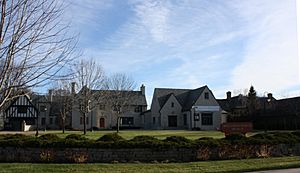 Founded in 1959, Neenah's Bergstrom-Mahler Museum has a collection of glass art comprising over 3,000 pieces, concentrating in historic paperweights and Germanic glasswork.

Neenah hosts significant steel and paper industries. Some paper companies include Clearwater Paper, Essity, Kimberly-Clark and Neenah Paper. Kimberly-Clark was founded in Neenah and maintains significant operations there, though its headquarters moved to Irving, Texas in the 1980s. Manhole covers manufactured at Neenah Foundry can be found throughout the central and southern United States and parts of Europe.

All content from Kiddle encyclopedia articles (including the article images and facts) can be freely used under Attribution-ShareAlike license, unless stated otherwise. Cite this article:
Neenah, Wisconsin Facts for Kids. Kiddle Encyclopedia.