Hayton is an unincorporated community in the town of Charlestown, Calumet County, Wisconsin, United States. It is located a few miles (kilometers) east of Chilton at the intersection of U.S. Route 151 and County T. 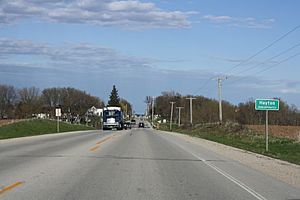 The Killsnake River, a fork of the Manitowoc River, flows eastward through the community. It is dammed by a mill and the sediments have been contaminated by PCBs.

Hayton was the first settlement on the Killsnake River. It was settled in the 1840s by William Urmston and it was originally named Wallersville after one of the landowners before it was renamed Hayton.

All content from Kiddle encyclopedia articles (including the article images and facts) can be freely used under Attribution-ShareAlike license, unless stated otherwise. Cite this article:
Hayton, Wisconsin Facts for Kids. Kiddle Encyclopedia.