Kiel was once known as the "Wooden Shoes Capital of Wisconsin," as it held the only wooden shoes factory in Wisconsin.

Charley Lindemann immigrated to the area and began a settlement among the Native American Menominee and Potawatomi tribes. His wife named the community after her home town of Kiel, Germany. Two years later, Col. Henry F. Belitz, later nicknamed the "Father of Kiel", built a hotel and mill along the north side of the Sheboygan River. A road was built across Wisconsin to connect Green Bay with Milwaukee area communities. The bridge was built across the Sheboygan River in 1858 connecting Kiel with Sheboygan. In the late nineteenth century to the early twentieth century, Kiel became a manufacturing area with businesses specializing in brick, wood shoes, machine, and furniture manufacturing.

A book called "Yellowbird" written by Kielite Henry Goeres in the late 1800s recounts - in a blend of fact and fiction - the early history of the settlement in the 1850s when European settlers interacted with Native Americans in the area.

The city continues to retain a diverse manufacturing and commercial base, which has long been a characteristic of the community.[2]

Each year in August, Kiel holds the Kiel Community Picnic or "Kiel Picnic" in City Park.[3] At present, the Kiel Picnic runs for four days from a Thursday through a Sunday. The Kiel Parade is held on Fremont Street on the Sunday of the Kiel Picnic. Traditionally, the firing of a cannon announced the start of the Picnic.

Kiel has a significant amount of German heritage, and each June, the city holds "German Days" in City Park.[4]

Kiel is home to the highly-regarded Kiel Municipal Band, a community marching band tracing its origins to the late 1800s. The band is known for its signature tune "Invincible Fidelity".

The city is home to an abundance of public parks and walking trails. 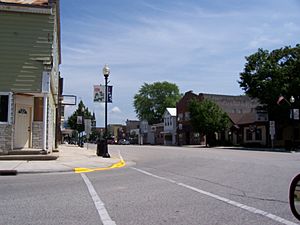 Wisconsin Highway 67 run north/south at the extreme east edge of Kiel. Highways 32 and 57 run through downtown Kiel, entering the city from the north at the northwest corner of the city and enter from the east at the southeast corner of the city. Wisconsin Highway 149 (now CTH XX east of Kiel) originally had its western terminus in Kiel. It later was extended west to Fond du Lac. Many years later the original route from Cleveland to Kiel was decommissioned and the eastern terminus of the highway was located in Kiel. The entire route was decommissioned in the 2000s.The Sheboygan River enters the city from the Kiel Marsh at the southwest edge of the city under a railroad trestle, meanders through downtown under a wooden footbridge and vehicular bridge, and exits the city in the east side of the city. The river is rarely used as a means of transportation, though it is used for recreational purposes, including canoeing and fishing in warm weather and, in the winter, ice skating and snowmobiling. There is a dam in downtown Kiel, another downstream in Rockville, and a third several miles downstream in Millhome.

Kiel is served by the Wisconsin and Southern Railroad. Historically this line was built in 1872 by the Milwaukee Road.

All content from Kiddle encyclopedia articles (including the article images and facts) can be freely used under Attribution-ShareAlike license, unless stated otherwise. Cite this article:
Kiel, Wisconsin Facts for Kids. Kiddle Encyclopedia.