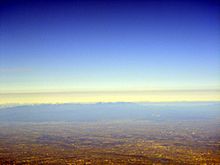 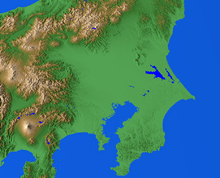 Map of Kantō Plain; Tokyo Bay can be seen below center of picture.

The Kantō Plain (Japanese: 関東平野code: ja is deprecated , Hepburn: Kantō heiya) is the largest plain in Japan. It is in the Kanto Region of central Honshū. The total area 17,000 km2 covers more than half of the region. It extends over Tokyo, Saitama Prefecture, Kanagawa Prefecture, Chiba Prefecture, Gunma Prefecture, and Tochigi Prefecture.

A number of plateaus make up a large part of the plain. These large plateaus are divided into smaller ones by shallow river valleys. Volcanic ash from surrounding volcanoes are thought to have been deposited on these plateaus.

What is unusual is the overall tilt of the plateaus and hills. The entire area is slightly bent or slanted and forms a basin centered in the Tone River and Tokyo Bay. Tectonic changes are still happening, as the plain’s central region gradually sinks lower towards sea level.

All content from Kiddle encyclopedia articles (including the article images and facts) can be freely used under Attribution-ShareAlike license, unless stated otherwise. Cite this article:
Kantō Plain Facts for Kids. Kiddle Encyclopedia.