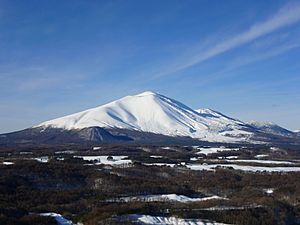 Karuizawa is located in eastern Nagano Prefecture, bordered by Gunma Prefecture to the north, east and south. The town is located on an elevated plain at the foot of Mount Asama, one of Japan's most active volcanoes. The mountain is classed as a Category A active volcano. A small eruption was detected in June 2015, a more significant eruption spewing hot rocks and a plume of ash occurred in February 2015. Mt. Asama's most destructive eruption in recent recorded history took place in 1783, when over 1,000 were killed. The volcano is actively monitored by scientists and climbing close to the summit is prohibited.

The area of present-day Karuizawa was part of ancient Shinano Province, and developed as Karuizawa-shuku, a post station on the Nakasendō highway connecting Edo with Kyoto during the Edo period. 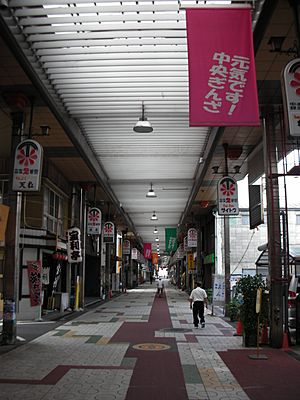 At an elevation of 1,000 m (3,281 ft) and a temperate summer climate, Karuizawa is a popular year round resort offering many outdoor sports, hot spring and recreational activities. Convenient road and rail access from central Tokyo, has ensured Karuizawa's popularity as a location for second homes and resort hotels since the Meiji era.

The town is known for its historic shopping street known as "Ginza dōri" or "Kyū-dō" (Ginza Street, or the Old Road) and association with both Japanese royalty and visitors such as John Lennon and Yoko Ono. Karuizawa hosted equestrian events in the 1964 Summer Olympics as well as curling in the 1998 Winter Olympics. To date, it is the only city in the world to have hosted both Summer and Winter Olympic events.

Since 1997, Karuizawa has been accessible via the JR East Nagano Shinkansen. New high speed rail links has resulted in modest population growth and the development of large outlet style shopping malls.

All content from Kiddle encyclopedia articles (including the article images and facts) can be freely used under Attribution-ShareAlike license, unless stated otherwise. Cite this article:
Karuizawa, Nagano Facts for Kids. Kiddle Encyclopedia.