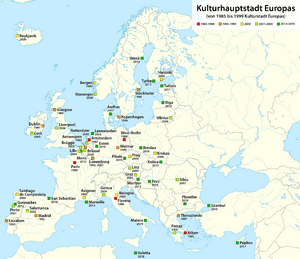 The European Capital of Culture is a city chosen by the European Union for a period of one calendar year. The city is given a chance to show its cultural life and cultural development. Most of the cities are very popular and are known internationally (by people around the world).

According to the official EU website. From 2014 to 2020, these are only the countries have been chosen, based on the rotation system.

All content from Kiddle encyclopedia articles (including the article images and facts) can be freely used under Attribution-ShareAlike license, unless stated otherwise. Cite this article:
European Capital of Culture Facts for Kids. Kiddle Encyclopedia.