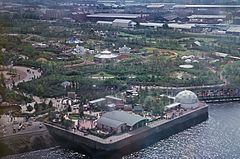 An overhead view of the festival site, and its surrounding urban environment.

The Glasgow Garden Festival was the third of the United Kingdom's five National Garden Festivals. It was the only one to take place in Scotland. It was held in Glasgow between April and September 1988.

All content from Kiddle encyclopedia articles (including the article images and facts) can be freely used under Attribution-ShareAlike license, unless stated otherwise. Cite this article:
Glasgow Garden Festival Facts for Kids. Kiddle Encyclopedia.