Kaunas is in the Russian Empire, it was the capital of the Kaunas Governorate from 1843 to 1915. During the interwar period, it served as the temporary capital of Lithuania, when Vilnius was part of Poland between 1920 and 1939. During that period Kaunas was celebrated for its rich cultural and academic life, fashion, construction of countless Art Deco and Lithuanian National Romanticism architectural-style buildings as well as popular furniture, the interior design of the time, and a widespread café culture.

The city interwar architecture is regarded as among the finest examples of European Art Deco and has received the European Heritage Label. It contributed to Kaunas being named as the first city in Central and Eastern Europe to be designated as a UNESCO City of Design. Kaunas has been selected as the European Capital of Culture for 2022, together with Esch-sur-Alzette, Luxembourg.

The city is the capital of Kaunas County, and the seat of the Kaunas city municipality and the Kaunas District Municipality. It is also the seat of the Roman Catholic Archdiocese of Kaunas. Kaunas is located at the confluence of the two largest Lithuanian rivers, the Nemunas and the Neris, and is near the Kaunas Reservoir, the largest body of water in the whole of Lithuania. 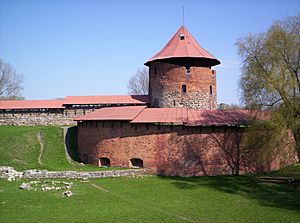 The castle in Kaunas

An old legend claims that Kaunas was established by the Romans in ancient times. These Romans were supposedly led by a patrician named Palemon, who had three sons: Barcus, Kunas and Sperus. Palemon fled from Rome because he feared the mad Emperor Nero. Palemon, his sons and other relatives travelled to Lithuania. After Palemon's death, his sons divided his land. Kunas got the land where Kaunas now stands. He built a fortress near the confluence of the Nemunas and Neris rivers, and the city that grew up there was named after him. A suburban region in the vicinity is named "Palemonas". 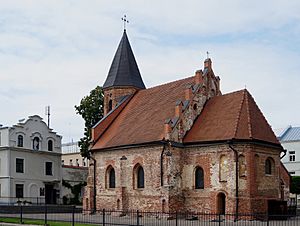 Kaunas city is a centered around culture. The Old Town of Kaunas is located at the confluence of the Nemunas and Neris Rivers where old architectural monuments and other historical buildings are located. Located to the East of the Old Town is the city's New Town, which started developing in 1847 and got its name when it became a distinct part of the city. Central Kaunas is defined by two pedestrian streets: the 2-km-long Laisvės alėja (Liberty Avenue), a central street of the city, lined by linden trees and decorated with flower beds.

The Old Town is the historical center of Kaunas. The streets in Old Town have been turned to pedestrian sidewalks, so it is best to tour the place by foot. Prominent features of the Old Town include Kaunas Castle, the Town Hall, and the historical Presidential Palace. 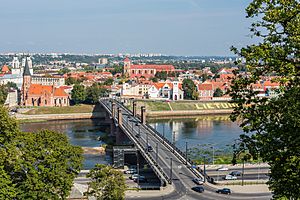 The Town Hall in Kaunas played an important role in the Medieval Times as a center for trade, festivals, and criminals were brought here for punishment. The Town Hall was originally built with wooden frames, however, after numerous fires in 1542 they began to construct buildings with stone. The stone buildings, however, also burned down so the Town Hall that stands today was constructed in a more advanced way, which took from 1771 to 1780. The Town Hall is still a center of culture today, it holds weddings and is the home of the Museum of Ceramics.

Other historical, cultural features of Kaunas include: 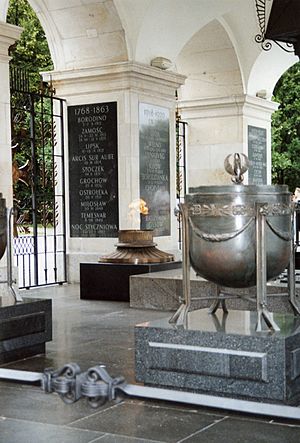 Tomb of the Unknown Soldier (interior, including eternal flame)

Kaunas is often called a city of museums, because of the abundance and variety of them. The museums in Kaunas include: 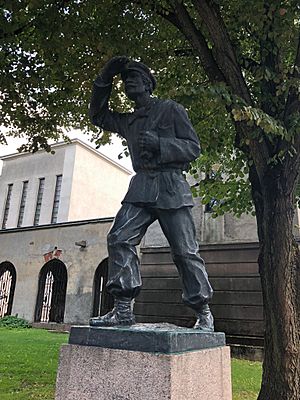 All content from Kiddle encyclopedia articles (including the article images and facts) can be freely used under Attribution-ShareAlike license, unless stated otherwise. Cite this article:
Kaunas Facts for Kids. Kiddle Encyclopedia.