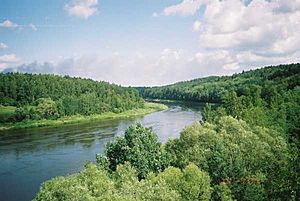 Neman or Niemen or Nemunas is a major Eastern European river. It starts in Belarus and floww through Lithuania before draining into the Curonian Lagoon and then into the Baltic Sea at Klaipėda. It is the northern border between Lithuania and Russia's Kaliningrad Oblast in its lower reaches. It also very briefly forms part of the border between Lithuania and Belarus. It is the 14th largest river in Europe, the largest in Lithuania and the 3rd largest in Belarus. People are able to travel on it for most of its 900-kilometer length. Its depth varies from one meter to five meters.

Atlantic salmon used to migrate upstream to spawn. The dams on the river made there be less. The dam at Kaunas does not provide fish ladders.

All content from Kiddle encyclopedia articles (including the article images and facts) can be freely used under Attribution-ShareAlike license, unless stated otherwise. Cite this article:
Neman River Facts for Kids. Kiddle Encyclopedia.