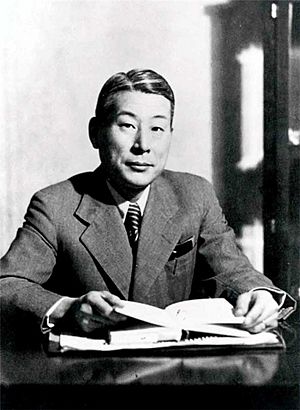 Chiune Sugihara (杉原 千畝, Sugihara Chiune, 1 January 1900 – 31 July 1986) was a Japanese diplomat. He served as Vice-Consul for the Empire of Japan in Lithuania during World War II. He was best known for helping more than 6,000 Jews leave Lithuania during the Holocaust. He gave them visas to Japan. In 1985, Israel named him to the Righteous Among the Nations for his actions. He was sometimes called the "Japanese Schindler".

Sugihara was born in Yaotsu, Gifu. He was first married to Klaudia Semionovna Apollonova until their divorce in 1935. He was later married to Yukiko Sugihara. They had four sons.

All content from Kiddle encyclopedia articles (including the article images and facts) can be freely used under Attribution-ShareAlike license, unless stated otherwise. Cite this article:
Chiune Sugihara Facts for Kids. Kiddle Encyclopedia.