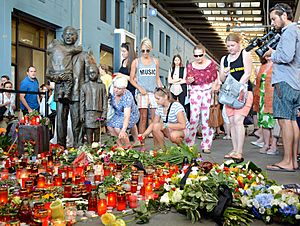 Commemorative event to honor the memory of Sir Nicholas Winton on the first platform at the Prague Main Railway Station at the sculpture, which is dedicated to him. (Sculpture author: Flor Kent; sculpture unveiling date: Sept.1st, 2009)

Sir Nicholas George Winton, MBE (born Nicholas George Wertheimer; 19 May 1909 – 1 July 2015) was an English humanitarian. He is best known for his role in the rescue of 669 mostly Jewish children from German-occupied Czechoslovakia before World War II. This event became known as the Czech Kindertransport. He was also known as the "British Schindler".

Winton was born Nicholas George Wertheimer in Hampstead, London. His parents were German Jews. The family later became Christians and Winton was baptised. In 1923, he began studying at Stowe School. He married Grete Gjelstrup, a woman of Danish origin, in 1948. They were married until Gjelstrup's death in 1999. They had three children together, Nicholas, Barbara and Robin.

All content from Kiddle encyclopedia articles (including the article images and facts) can be freely used under Attribution-ShareAlike license, unless stated otherwise. Cite this article:
Nicholas Winton Facts for Kids. Kiddle Encyclopedia.