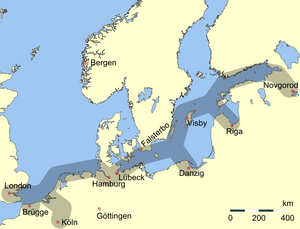 The Hanseatic League (German: die Hanse, Dutch: de Hanze, Estonian: hansa, Latvian: Hanza Polish: Hanza, Swedish: Hansan) was an alliance of trading guilds. These guilds established and maintained a trade monopoly over the Baltic Sea and most of Northern Europe. This monopoly lasted for a time in the later Middle Ages and the Early Modern period, between the 13th and 17th centuries.

Many cities were part of it.

Cities that are still called Hansestadt

The following cities were part of the Hanse. They carry the word Hansestadt (Hanseatic City) as part of their official city name:

All content from Kiddle encyclopedia articles (including the article images and facts) can be freely used under Attribution-ShareAlike license, unless stated otherwise. Cite this article:
Hanseatic League Facts for Kids. Kiddle Encyclopedia.