Goslar is a historic city in Germany. It has about 43,000 inhabitants. 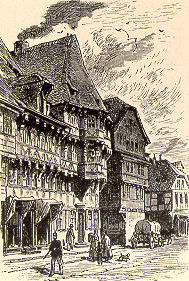 The German Emperor Henry I founded Goslar in 922. In the 11th century Goslar became seat of a Pfalz, a temporary seat of the Emperor. In 1253 Goslar became a Free City (that means without being ruled a Duke) in the Holy Roman Empire and joined the Hanseatic League.

In the Thirty-year War Goslar belonged to the loyalists of the Emperor, although its territory belonged to a Protestant region. The Swedish King Gustav II Adolph punished Goslar for supporting the imperial forces. After 1642 Goslar came under the rule of the Welfs.

In the 19th century Goslar lost its economic base. Now it lives mainly on tourism.

All content from Kiddle encyclopedia articles (including the article images and facts) can be freely used under Attribution-ShareAlike license, unless stated otherwise. Cite this article:
Goslar Facts for Kids. Kiddle Encyclopedia.