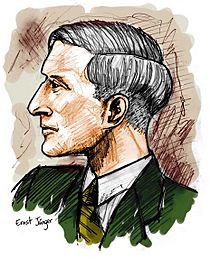 A drawing of Jünger

Ernst Jünger (29 March 1895 – 17 February 1998) was a German writer. In addition to his political essays, novels and diaries, he is well known for Storm of Steel, an account of his experience during World War I.

Jünger was born in Heidelberg, German Empire on 29 March 1895. He was raised in Hannover, German Empire. Jünger was married to Gretha Von Jeinsen from 1925 until her death in 1960. They had two children. Jünger died on 17 February 1998 in Riedlingen, Germany from natural causes, aged 102.

All content from Kiddle encyclopedia articles (including the article images and facts) can be freely used under Attribution-ShareAlike license, unless stated otherwise. Cite this article:
Ernst Jünger Facts for Kids. Kiddle Encyclopedia.