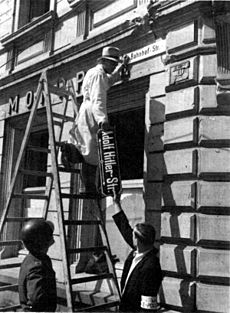 Workers removing the signage from a former "Adolf Hitler-Straße" (street) in Trier, 12 May 1945

Denazification was an Allied initiative to get rid of Nazism from German and Austrian society, culture, press, economy, judiciary, and politics.

It was carried out by removing those who had been Nazi Party or SS members from positions of power and influence and by disbanding or rendering impotent the organisations associated with Nazism.

The programme of denazification was launched after the end of the Second World War and was solidified by the Potsdam Agreement in August 1945.

All content from Kiddle encyclopedia articles (including the article images and facts) can be freely used under Attribution-ShareAlike license, unless stated otherwise. Cite this article:
Denazification Facts for Kids. Kiddle Encyclopedia.