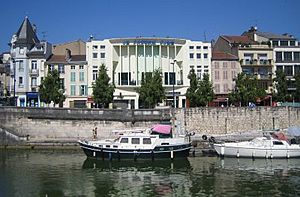 Verdun is a commune in Lorraine. About 18,000 people live there. It is the sub-prefecture of the Meuse department and lies on the river of the same name. It has a long history. The city is known for its Dragées, a confectionery which contain either almonds or anise seeds. The London Quai (Quai de Londres) is named in honor of the British capital that financed the city's reconstruction after Word War I.

All content from Kiddle encyclopedia articles (including the article images and facts) can be freely used under Attribution-ShareAlike license, unless stated otherwise. Cite this article:
Verdun Facts for Kids. Kiddle Encyclopedia.