Treaty of Verdun facts for kids 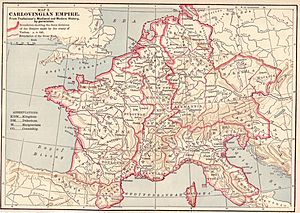 The three main divisions of 843.

The Treaty of Verdun (843) happened two generations after Charlemagne and divided his empire into three parts. When Charlemagne's son Louis the Pious died in 840, his oldest son Lothair I said that he ruled his younger brothers and their lands. But his brothers Louis the German and Charles the Bald won the Battle of Fontenay (841).

Division of the empire

Each of the brothers already had one kingdom - Lothair in Italy, Louis the German in Bavaria, and Charles the Bald in Aquitaine.

All content from Kiddle encyclopedia articles (including the article images and facts) can be freely used under Attribution-ShareAlike license, unless stated otherwise. Cite this article:
Treaty of Verdun Facts for Kids. Kiddle Encyclopedia.