Aquitaine (Occitan: Aquitània; Basque: Akitania; Spanish: Aquitania) is a part of southwestern France. It was once an administrative region but is now part of the administrative region of Nouvelle-Aquitaine. With over 41,000 square kilometers, it is one of the largest regions of mainland France (the largest of all French regions is French Guiana, in South America).

Its capital was Bordeaux, the largest city. The French name of the people living in the region is Aquitain.

The five departments in the region were Dordogne, Gironde, Landes, Lot-et-Garonne, and Pyrénées-Atlantiques.

The Aquitaine region was the third largest region of Metropolitan France, after Midi-Pyrénées and Rhône-Alpes. Its area was 41,284 km2 (15,940 sq mi). It bordered with three French regions: Poitou-Charentes to the north, Limousin to the northeast and Midi-Pyrénées to the east. To the south is Spain (Aragon and Navarre) and to the west the Atlantic Ocean. The coast along the Atlantic Ocean, part of the Bay of Biscay, is called the Côte d'Argent (Silver Coast).

The Greenwich Meridian passes through Aquitaine.

The climate is mild - except in the high mountains - all year round. On the Atlantic coast, the annual average temperature is above 15 °C, in Bordeaux is about 14 °C and on the border of Limousin is still 11 °C. Rainfall is relatively high and is higher in the south of the region.

In the Middle Ages Aquitaine was at times a kingdom and a duchy. Various wars made it larger and smaller. Aquitane came into the control of England when Eleanor of Aquitaine married Henry II of England in 1152. It remained in English control until 1453 at the end of the Hundred Years' War.

The Aquitaine region is formed by five departments: 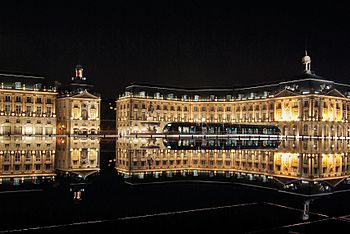 Place de la Bourse at night with the Miroir d'eau and tram, Bordeaux

All content from Kiddle encyclopedia articles (including the article images and facts) can be freely used under Attribution-ShareAlike license, unless stated otherwise. Cite this article:
Aquitaine Facts for Kids. Kiddle Encyclopedia.