Lot-et-Garonne (Occitan: Òlt e Garona) is a department in the southwest of France named after the Lot and Garonne rivers.

Lot-et-Garonne was formed during the French Revolution on 4 March 1790 with parts of the old provinces of Guyenne and Gascony. It was divided into nine districts: Agen, Nérac, Marmande, Tonneins, Villeneuve, Lauzun, Monflanquin, Casteljaloux and Valence.

Agen and Aiguillon were alternatively the capital of the department but in 1791 it was decided that only Agen would be the capital.

Several of the original southeastern cantons in the arrondissements of Agen and Villeneuve-sur-Lot were separated from it in 1808 to become a part of the newly created department of Tarn-et-Garonne.

The departement is surrounded by two regions and six departments:

Other river is the Baïse, a left tributary of the Garonne.

In the west of the department, mainly in the arrondissement of Nérac, there is a forest of maritime pine like in the Landes department.

The climate of Estillac, where is the Agen La Garenne Airport, is Marine West Coast Climate (Köppen climate classification Cfb), with mild winters and warm summers.

There are 4 arrondissements (districts), 21 cantons and 319 communes (municipalities) in Lot-et-Garonne.

The following is a list of the 21 cantons of the Lot-et-Garonne department (with their INSEE codes), following the French canton reorganisation which came into effect in March 2015:

Evolution of the population in Lot-et-Garonne 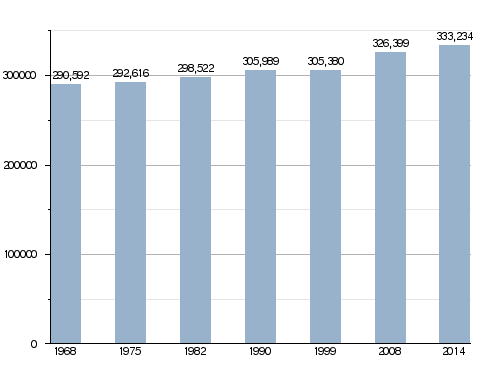 All content from Kiddle encyclopedia articles (including the article images and facts) can be freely used under Attribution-ShareAlike license, unless stated otherwise. Cite this article:
Lot-et-Garonne Facts for Kids. Kiddle Encyclopedia.