Tarn-et-Garonne is a department in the southwest of France, in the Occitanie region. It is named after the Garonne river and its tributary Tarn. Its prefecture and largest city is Montauban.

Tarn-et-Garonne is not one of the original 83 departments created during the French Revolution on 4 March 1790. It was created on 4 November 1808 during the First French Empire by Napoleon I.

It was formed out of territories belonging to neighboring areas. More than half of the territory was taken from the Lot (including Montauban and Moissac), over one-third was taken from Haute-Garonne (including Castelsarrasin), and the rest from the departments of Lot-et-Garonne, Gers, and Aveyron.

The new department had three arrondissements: Montauban, Castelsarrasin and Moissac. The prefecture was Montauban. On 10 September 1926, the arrondissement of Moissac was eliminated. 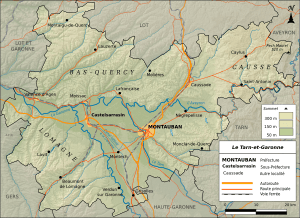 Even if Tarn-et-Garonne is one of the smallest departments of Metropolitan France, there is a great diversity of landscapes in the department; for example, the plains between the Tarn and Garonne rivers and in the valley of the Aveyron river, the hills of the Lomagne region (southwest of the department) and in the north, including the Causse (a limestone plateau) of the northeast.

The main rivers in the department are the Garonne and its tributaries Tarn and Aveyron.

The climate of Montauban is an oceanic climate with template summers, Cfb (Marine West Coast Climate) in the Köppen climate classification.

There are 2 arrondissements (districts), 15 cantons and 195 communes (municipalities) in Tarn-et-Garonne.

The following is a list of the 15 cantons of the Tarn-et-Garonne department (with their INSEE codes), following the French canton reorganisation which came into effect in March 2015:

The city with more people living in it is the capital, Montauban (58,826). The subprefecture of Castelsarrasin has 13,765 inhabitants.

Evolution of the population in Tarn-et-Garonne

All content from Kiddle encyclopedia articles (including the article images and facts) can be freely used under Attribution-ShareAlike license, unless stated otherwise. Cite this article:
Tarn-et-Garonne Facts for Kids. Kiddle Encyclopedia.