The Aveyron (Occitan: Avairon) is a river in southern France, tributary of the Tarn river. The Aveyron department is named after this river.

Its discharge (volume of water which passes through a section of the river per unit of time) has been observed from 1914 to 2017 in Piquecos, a commune of the Tarn-et-Garonne department close to the city of Montauban near the confluence with the Tarn river. Its average yearly discharge at Piquecos is 53.10 m3/s (1,875 cu ft/s). 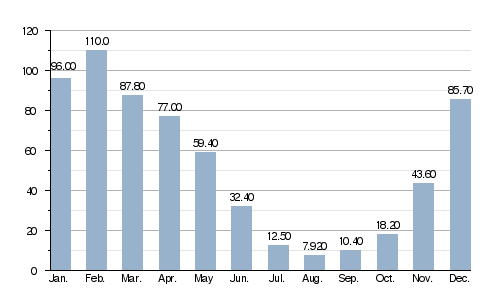 The source of the Aveyron is in southern Massif Central, near the commune of Sévérac-le-Château, in the Aveyron department, at an altitude of 735 m (2,411 ft).

The Aveyron passes through the departments and towns of:

The Aveyron river flows through 62 communes. Three communes have the name of the river: Agen-d'Aveyron, Gaillac-d'Aveyron, Clairvaux-d'Aveyron.

Finally, it flows into the Tarn river to the nortwest of Montauban, between Lafrançaise and Villemade, in the Tarn-et-Garonne department, at 71 m (233 ft) of altitude.

The main tributaries of the Aveyron are:

All content from Kiddle encyclopedia articles (including the article images and facts) can be freely used under Attribution-ShareAlike license, unless stated otherwise. Cite this article:
Aveyron (river) Facts for Kids. Kiddle Encyclopedia.