Lot (Occitan: Òlt) is a French department in the Occitanie region of southern France named after the Lot river. Its prefecture and largest city is Cahors.

Lot is one of the original 83 departments created during the French Revolution on 4 March 1790. It was created from the old province of Quercy.

In 1808, some of the original southeastern cantons were separated from it to form the department of Tarn-et-Garonne. It originally extended much farther to the south and included the city of Montauban.

The department borders with 6 other departments in 3 regions:

The Lot river crosses the department from east to west with numerous meanders. The Dordogne river flows through the northern part of the department.

There are seven natural regions in the department:

The climate in Gourdon, in the north of the department at an altitude of 263 m (863 ft) above sea level, is an oceanic climate with relatively hot summers, mild winters and abundant rainfall, Cfb in the Köppen climate classification.

The department is managed by the Departamental Council of the Lot in Cahors. Lot is part of the Occitanie region.

There are 3 arrondissements (districts), 17 cantons and 326 communes (municipalities) in Lot.

The following is a list of the 17 cantons of the Lot department, following the French canton reorganisation which came into effect in March 2015:

The inhabitants of Lot are known, in French, as Lotois (women: Lotoises).

The city with more people living in it is the capital, Cahors (19,630). The subprefectures of Figeac and Gourdon have, respectively, 9,820 and 4,297 inhabitants.

Evolution of the population in Lot

The cities in the department with more of 2,000 inhabitants are: 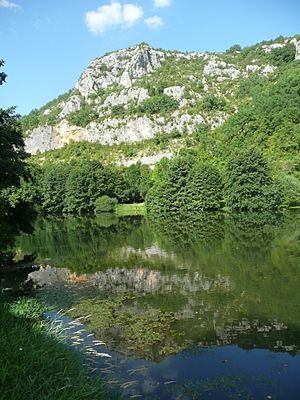 All content from Kiddle encyclopedia articles (including the article images and facts) can be freely used under Attribution-ShareAlike license, unless stated otherwise. Cite this article:
Lot (department) Facts for Kids. Kiddle Encyclopedia.