Cahors (Occitan: Caors) is a commune in southwestern France. Located in the region of Occitanie, it is the prefecture (capital) of the Lot department. It is also the capital of 3 cantons: Cahors-1, Cahors-2 and Cahors-3.

Cahors was the capital of the old province of Quercy and the people of this city are known, in French, as cadurciens (women: cadurciennes); this name comes from the old name of the city, Carduca.

Cahors is an ancient town. The people that inhabited the area at the time of the Roman conquest were called Carduci and so the Romans named the town as Divona or Divona Cadurcorum, "Divona of the Cadurci"; Divona was a source of water, now called "fontaine des Chartreux". The word Cahors comes from Cadurcorum.

Cahors is located in the southwest of France, in the old province of Quercy, in the valley of the Lot river, and is found in a peninsula (French: presqu'île) formed by an U-shaped meander of that river which gives its name to the department.

The climate of Cahors, in the Köppen climate classification, is Cfb - Oceanic climate with template summers.

Evolution of the population in Cahors 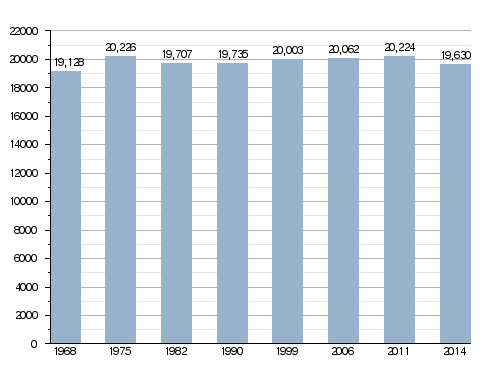 Cahors is the prefecture of the Lot department, the capital of the arrondissement of Cahors and the administrative centre (French: chef-lieu) of the Cahors-1, Cahors-2 and Cahors-3 cantons.

Some places of interest are:

All content from Kiddle encyclopedia articles (including the article images and facts) can be freely used under Attribution-ShareAlike license, unless stated otherwise. Cite this article:
Cahors Facts for Kids. Kiddle Encyclopedia.