Merlot is a type of red wine and it is the main agricultural production of the Swiss canton called ticino. 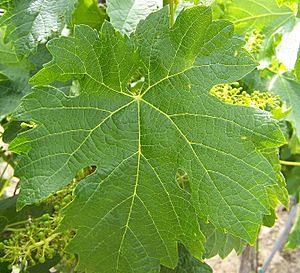 Merlot grapes are identified by their loose bunches of large berries. The color has less of a blue/black hue than Cabernet Sauvignon grapes and with a thinner skin and fewer tannins per unit volume. It normally ripens up to two weeks earlier than Cabernet Sauvignon. Also compared to Cabernet, Merlot grapes tend to have a higher sugar content and lower malic acid. Ampelographer J.M. Boursiquot has noted that Merlot has seemed to inherit some of the best characteristics from its parent varieties—its fertility and easy ripening ability from Magdeleine Noire des Charentes and its color, tannin and flavor phenolic potential from Cabernet Franc.

Merlot thrives in cold soil, particularly ferrous clay. The vine tends to bud early which gives it some risk to cold frost and its thinner skin increases its susceptibility to the viticultural hazard of Botrytis bunch rot. If bad weather occurs during flowering, the Merlot vine is prone to develop coulure. The vine can also be susceptible to downy mildew (though it has better resistance to powdery mildew than other Bordeaux varieties) and to infection by leafhopper insect varieties.

Water stress is important to the vine with it thriving in well drained soil more so than at base of a slope. Pruning is a major component to the quality of the wine that is produced with some producing believing it is best to prune the vine "short" (cutting back to only a few buds). Wine consultant Michel Rolland is a major proponent of reducing the yields of Merlot grapes to improve quality. The age of the vine is also important, with older vines contributing character to the resulting wine.

A characteristic of the Merlot grape is the propensity to quickly overripen once it hits its initial ripeness level, sometimes in a matter of a few days. There are two schools of thought on the right time to harvest Merlot. The wine makers of Château Pétrus favor early picking to best maintain the wine's acidity and finesse as well as its potential for aging. Others, such as Rolland, favor late picking and the added fruit body that comes with a little bit of over-ripeness. 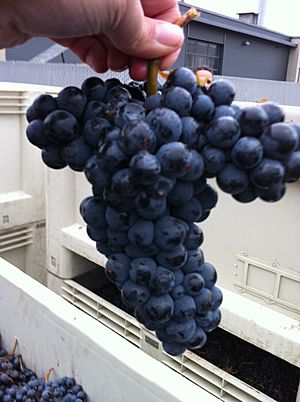 Cabernet Franc, one of the parent varieties of Merlot.

Merlot is one of the world's most widely planted grape variety with plantings of the vine outpacing even the more well-known Cabernet Sauvignon in many regions, including the grape's homeland of France. Here, France is home to nearly two thirds of the world's total plantings of Merlot. Beyond France it is also grown in Italy (where it is the country's 5th most planted grape), Algeria,California, Romania, Australia, Argentina, Bulgaria, Canada, Chile, Greece, New Zealand, South Africa, Switzerland, Croatia, Hungary, Montenegro, Slovenia, Mexico and other parts of the United States such as Washington, Virginia and Long Island. It grows in many regions that also grow Cabernet Sauvignon but tends to be cultivated in the cooler portions of those areas. In areas that are too warm, Merlot will ripen too early.

In places like Israel, Merlot is the second most widely planted grape variety after Cabernet Sauvignon with 1,000 hectares (2,500 acres) in cultivation, making very "New World-style" wines. The grape can also be found in Turkey with 429 hectares (1,060 acres) in 2010 as well as Malta and Cyprus.

All content from Kiddle encyclopedia articles (including the article images and facts) can be freely used under Attribution-ShareAlike license, unless stated otherwise. Cite this article:
Merlot Facts for Kids. Kiddle Encyclopedia.