Vineyard in the Napa Valley

California wine is wine made in the U.S. state of California. Almost three quarters the size of France, California accounts for nearly 90 percent of American wine production. The production of wine in California alone is one third larger than that of Australia. If California were a separate country, it would be the world's fourth largest wine producer.

The state's viticultural history dates back to the 18th century when Spanish missionaries planted the first vineyards to produce wine for Mass.

Today there are more than 1,200 wineries in the state, ranging from small boutique wineries to large corporations with distribution around the globe.

People first made wine in California in 1769. Missionaries from Mexico brought their wine plants to produce wine for the mass. Later, people coming from Europe improved the making of wine. They had brought their own kinds of wine plants.

Before 1920, there was more wine made every year. Then Prohibition began. During Prohibition, it was not allowed to sell alcoholic drinks in the United States. It almost ended the making of wine in California. Californian wine-making took a long time to recover.

In 1990, the USA sent less than five percent of its wine to other countries. After that, exports of wine from California increased. Today, the USA is one of the big wine industries. 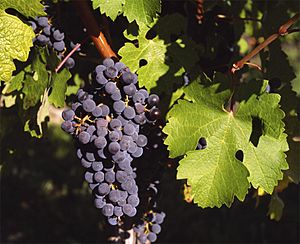 Grapes for wine used to need warm weather. People wanted to grow more grapes, so they learned how to grow them where the weather was not as warm. That way of growing grapes is called "cool climate viticulture". Vines are now planted in colder places, up to 700 metres (2,300 ft) above sea level. Monterey County was the first place where that was done. 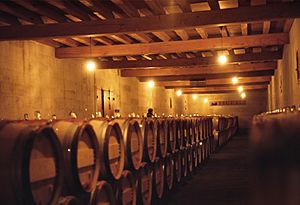 In California, there are more than 800 wine cellars. Wine cellars are big rooms were wine is stored. They are part of a winery, the place where wine is produced.

Two of the most famous growing areas for wine in California are Napa County and Sonoma County. The wines from those places are some of the best in the world. Some examples of the wines made there are Chardonnay and Cabernet Sauvignon.

All content from Kiddle encyclopedia articles (including the article images and facts) can be freely used under Attribution-ShareAlike license, unless stated otherwise. Cite this article:
California wine Facts for Kids. Kiddle Encyclopedia.